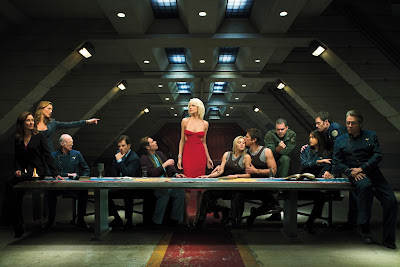 Now we know. It’s us in the future. The long-hoped-for return to their origins in ashes — a dead Mother Earth. Irradiated. Nuked two millennia back, its great cities felled. Nothing left to fall back on, just a dream of how it once was and will never be again. A bit like Iggy Pop in the Swiftcover sponsor commercials topping and tailing each segment.

“Half sunk, a shatter'd visage lies, whose frown and wrinkled lip and sneer of cold command tell that its sculptor well those passions read which yet survive, stamp'd on these lifeless things, the hand that mock'd them and the heart that fed. Look upon my works, ye Mighty, and despair! Round the decay of that colossal wreck, boundless and bare, the lone and level sands stretch far away.”

Someone had an advanced sense of symmetry when they stuck Iggy in there — hyper-appropriate or what?

So this was home and the Thirteenth Tribe was Cylon. Just how bad can it get?

For some the devastating news is liberating. But not in the way we expect. A Beloved Character bites the bullet and won’t be coming back.

The last series of Battlestar Galactica began tonight (UK). Ten episodes taking us to the end of a cosmic ride in which the human race has been reduced to 39,751 souls lost in space, chased by a robotic nemesis bent on their extinction. But the enemy is ourselves: images of a shattered Gaza still vivid and merging with the myth of the Twelve Tribes of Israel scattered to the Colonies.

Starbuck, my favourite character, the one with whom I identify most, discovers the hard way that she’s a Cylon. Or is she? The Fifth Cylon is revealed.

All the Big Questions are rolled into a big ball and chucked at us in a kicker of an opening. Who are we? Where did we come from? What makes us human?

Dylan’s All Along The Watchtower is reprised for those who can hear. Let us not talk falsely now, the hour’s getting late.

Madam President as irritating as ever. She’s dying of cancer but she’s taking the knowledge and the Pythian Prophecy with her, burning her history, burning ours. Starbuck’s burning hers.

So many questions. And only nine episodes left.

Have got to watch this!

That's my next nine Tuesday nights spoken for.

I keep expecting to be sorely disappointed in BSG and it hasn't happened yet. They have 9 more episodes to do it. So far so good. Excellent use of Bob's apocalyptic song. Didn't an earlier season have a scene where Mario Savio's Sproul Hall speech was given verbatim in a show about a general strike on the fleet? I also saw an interview with Ron Moore where he was wearing a baseball hat with a symbol that looked suspiciously like the iconic image from a flag that once flew over 1/8 of the world's surface. Coincidence? I wonder.

Poor Starbuck... given the picture looks like da Vinci's Last Supper... erm, I'll leave you to fill in the rest!

Hi, Oliver. I've been trying to work out who's who and why.

Six is JC. Judas should be 5th or 6th from the left — maybe Lee Adama who's turned away from Six. Has his elbow on the table just as Judas does in the painting. On the other hand, so does Baltar, and he'd make a more likely Judas as he loves Six so much and is therefore in a position for any betrayal to have that much more meaning.

Starbuck is immediately to Six's right and should therefore be either Thomas, James or Philip. Doubting Thomas?

Matthew, Jude and Simon should form a group of three on the extreme right.

Anyhow, dying to solve the mystery of who Starbuck is and why she found what she did on Earth.

Rustbelt, I missed the Mario Savio reference, I'm ashamed to say. I'm intrigued. I'll try and find it in my boxed sets and have a look.

Thanks for the tip.

I don't watch TV, but now I want to start renting the Battlestar DVDs and start watching the series.

And I did love the original...

Madam Miaow -- many thanks for blogging about BSG.

As for Dualla's character biting the dust, I too was disapointed but can you blame the poor girl? Anyone who has spent time with Apollo would surely want to off themselves, no?

As for Starbuck, my favourite character, I believe she may be half-cyclon.

Tonight is episode #2 of the final season ...

There's a lot of intelligent stuff being worked out in the series you don't often find on TV. Hope you love it.

A, you had me rushing to my TV guide in case I was missing it. Are you watching in the US? Does this mean you're only half a week ahead of us? So we're all lost in the dark. Just like the 39 thousand in space ...

When I visited the other day I had to tear my eyes away, until I watched it last night.

Humans evolved on Kobol, and eventually built a race of machines. There was a nasty war between them and the 12 tribes of the humans fled to found the colonies. The mythical 13th tribe were lost.

Millennia late the humans, having forgotten their history, built a race of machines, who turned on them in two nasty wars.

The surviving humans make their way to Earth to find that not only had those humans built a race of machines who turned on them in a war a couple of thousand years previous, but that were themselves descended from the 13th tribe ... who were made up of the original cylons.

The semi-mystical plot line is starting to get very messy. I do wonder if they will iron it all out. That said, it's nothing compared to the tangled mess that is Lost (which is back t'nite :D)

h, Phil. Good thing I wrote "Spoiler Alert" at the top, then. I've inadvertently read spoilers for the next episode but I'm still looking forward to the final outcome.

So there were TWO stages of building machines? I guess there had to be with what we know now.

The main message I'm getting from this is that we're all connected and we would be a lot better off if we understood this.

I gave up on Lost when Virgin lost Sky in their spat a while back. Although it's back, I'm not tempted. I can't see where you can take that story. At times it was holding on by its fingernails.

Hi MM -- It's showed on Fridays in the US and Canada (where I live).

While I won't give you anything about the new episode, watch the spat between Gaeta and Starbuck. Damn, Starbuck is bad-ass and can get fraking nastey!