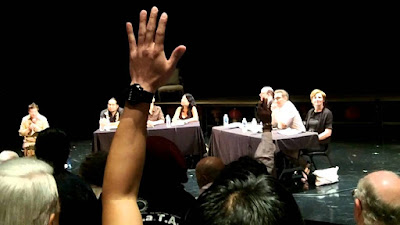 Yellowface. The monster that refuses to die in the final reel. It's back and this time it's still personal. As well as political.

There's been another ruck about the use of yellowface casting in theatre, where Asian characters are played by white actors. This time, it's in the US where La Jolla Playhouse has produced a play based on The Nightingale with mostly white and black actors, using only two Asians out of 12.

There are so few opportunities to employ Asian actors that each one, when it surfaces is precious. The argument over using blackface was won years ago, so why are we still having to fight for every Asian role?

Excluding any group from the cultural output of their own society dehumanises them. The effect of mystifying ethnic minorities — in particular east Asian who are nearly invisible both sides of the Atlantic — has political ramifications in that we become a vacuum into which people can dump all their fears. It's no good pleading the "cross-racial casting" defence when it only goes one way. Neither will "it's only a fantasy" do when the mythical world appropriates real people's culture in order to play out some inner psychic space of dominant groups.

So loud was the protest that La Jolla Playhouse finally had the guts and honesty to hold a panel discussion on 22nd July. You can watch the whole unedited debate here.

And here's American actor, Greg Watanabe, with an assessment of where we are right now.

My thoughts on "The Nightingale" at the La Jolla Playhouse, and the post show panel discussion on July 22:

I think it's important to communicate just how disrespected I feel. And I feel confident that many others in the Asian Pacific Islander American community feel the same way.

I feel like the APIA community has worked so hard to articulate and share our experience with racism, dominant culture, and white privilege and how those things have led to our exclusion and misrepresentation and to orientalism and fetishization.

So, to see a show set in "mythical China" where 6 out of 12 of the actors are white males and only 2 are Asian Americans...it's difficult not to just start shouting out swear words...it's that insulting; Asian Americans are relegated to token minority status in a play set in Asia.

And to hear the concept of "multi cultural casting" being used as a defense, as if we were against it, as if taking a show show set in Germany (an example the playwright offered) with its all its white roles and casting it non- traditionally means the same thing as taking a show set in "mythical China" with its 12 Asian characters and casting only 2 Asian Americans.

The first person chosen to speak from the audience, a white woman, asked, "are there any qualified Asians?" The African American actor who stood and spoke, enumerated the credits of the cast...as if to say they got cast because they are better than you. In addition to being beside the point, It's incredibly disrespectful.

Just like the young white woman who stood up and said she was Polish American, and then made a reference to African Americans cast in, "A Streetcar named Desire", as if to suggest that if that's okay, then we can cast non-Asians as Asians. Again, her white privilege allowing her to think that a level playing field exists, that there is no inequity in the American theater and that "multi cultural casting" is simply a style of theater.

One of the reasons the creative team is fighting so hard against the Asian setting and the Asian characters, and therefore the Asian actors, is that they didn't want it to be seen as an "Asian show"; they wanted an "East West show". They don't realize that they are essentially saying, "we don't think of Asian Americans as western"; and in a play with no references to Europe, "western" feels like "American". They saw an Asian American cast, and said, "it's too Chinese; we don't want to tell an asian story." as if Asian Americans can't tell a westernized story.

And the thing is, seeing the show, it seems like the creators want the play to be asian, to be Chinese. They want the exotic feel, the red and gold silk gowns, the paper lanterns, the chinese junks helmed by rice paddy hat wearing boatmen, magic flying, chinese dragons...which can be great...just don't try to run away from what it is, don't deny that that's part off the story you want to tell.

So if the setting is Chinese, or at the very least asian, then it should be cast that way. And it can even be cast multiculturally. But I ask that you try and imagine beyond a dominant white culture perspective, one where multicultural means half of the people are white. Instead, perhaps you could imagine an asian american view of a mythical China. One where the lead is Asian American, where Asian Americans make up a majority of the cast. And it would still be multicultural, still be East meets West, still be an american story.

The LA Times asks Are we really living in a post-racial world?