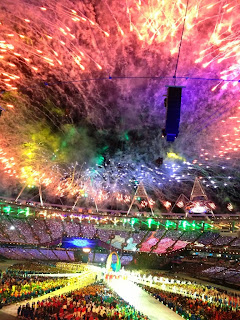 I'm not so sure Danny Boyle's expected establishment gong is as much of a dead cert as pundits assume now we've had a chance to unpack the movie director's critical state-of-the-nation London Olympics narrative. Last night's £27m opening extravaganza temporarily won me over from furious cynicism following the games' hijacking by Locog's pet corporations and their civil rights clampdown.

I should have realised — trust the creatives. The CREATIVES, not the crude showmen who might have turned in a vapid series of set pieces going no-where. I'm sorry I misjudged you Danny — the boy done good. This ceremony may have begun with a bucolic paradise with peasants tending their flocks but it ended with a vast setting sun as troglodyte primitives danced it into extinction.

Among the crowd-pleasers were woven some awesome subversive elements. Our unique selling points as a nation may be our musical back-catalogue, James Bond and the Queen, but even these were nicely handled. After watching Her Maj parachute into the stadium, I was hoping she might turn out to be the mystery cauldron igniter, maybe kicking a flaming football into the target, but Boyle had far more democratic plans for his climax.

He started with Kenneth Branagh as Isambard Kingdom Brunel, a benign engineer kicking off the industrial revolution before top-hatted capitalists (reminiscent of the ones in Eisenstein's Strike) mess it up, tearing up the turf and turning the peasants off the land.


Be not afeard. The isle is full of noises,
Sounds, and sweet airs, that give delight and hurt not.
Sometimes a thousand twangling instruments
Will hum about mine ears, and sometime voices
That, if I then had waked after long sleep
Will make me sleep again; and then in dreaming
The clouds methought would open and show riches
Ready to drop upon me, that when I waked
I cried to dream again.

As some have noticed, this is what Caliban says just before he tries to kill "an imperial innovator who took away his island". Hmm, I wonder what Boyle is saying here.

Filling the stadium with five huge chimneys and factories and foundries to the sound of 1,000 drummers, we're reminded that British power came from its industrial (r)evolution and the people who laboured in it. Of course, most of yer actual working class were working their arses off on stage for free, not sitting in the comfy seats they couldn't afford.

But they were represented, hammering drums and metal, actually making things, while the tool-free capitalists worked thin air, much as they do with their banking tricks.

What they eventually end up with is the forging of the five rings of the Olympic symbol (yeah, the one we're all banned from using even though we paid for most of it) rising above the audience like something hellish out of Mordor.

A parade of Windrush immigrants, 1960s cultural explosion (Beatles), cockneys and the ordinary people who helped make Britain, made the most of a diverse range of the population and ensured they weren't rendered invisible. Boyle might have had an eye on Brecht who asked, "Who built the seven gates of Thebes?".

However, it was the NHS segment that gave me the most squeeing pleasure as Boyle stuck it to Richard Branson and the privatisers. Melding the NHS and children's literature, a battalion of nurses and doctors wheeled in hospital beds occupied by children (two to a bed — how it will look when the Tories get through with it).

A childcatcher (Maggie Thatcher?), a terrifyingly oversized Voldemort and assorted monsters (coalition creeps and Big Biz) harry the children while NHS staff attempt to fight them off.

Best of all, who did Danny choose to read during this scene? None other than JK Rowling herself, not only creator of the monstrous Voldemort and most successful commercial British writer, but famously a supporter of the welfare state who sends her own children to state schools. What's more, she doesn't avoid tax on her vast fortune but spreads it out. Unlike certain others now running the nation. Danny, this leftie salutes you.

And the music to accompany this warning to the forces of evil to get their mitts off our NHS? Mike Oldfield's Tubular Bells. Significance? Tubular Bells was the phenomenal seller in the early 1970s which made Branson's Virgin empire (he even named one of his Virgin America Airlines planes "Tubular Belle"). Branson's Virgin, now scheming to run the PRIVATISED NHS SERVICE, including children's healthcare!!! Kudos, Danny!

Also noted: national hero in his own head, Tony Blair, who's been jonesing for inclusion in the Olympics all week and is looking to carve up the NHS with his Mee Healthcare company, didn't even get a mention.

But the CND did, its symbol formed out of multi-cultural dancers — including some disabled — to a musical medley of our greatest pop and rock hits.

As did Tim Berners-Lee who invented teh interwebz. (Brits also invented carbon-capture coal-burning technology but we haven't built even one.)

Abide With Me was sung to an Anish Kapoor-influenced dying sun, a reference to Boyle's movie Sunshine. The song is not only used as the rugby anthem and at FA Cup finals, but it's sung at the funerals of miners. Or mines. Or our entire productivity and everything we've known.

After the athletes paraded in, the event ended with a spectacular cauldron-lighting ceremony, carried out, not by a tired old sleb, but by the next generation of athletes: seven young men and women.

Rupert Murdoch tweeted that it was 'a little too politically correct'. At least he wasn't as crudely reactionary as the Tory who complained about multi-cultural representation and was buried in an avalanche of tweets.

Meanwhile, outside the Olympic Park, the Critical Mass bike protest was being kettled and intimidated — so unlike Beijing which British commentators never tire of sneering at. The furious cynicism is still there for Dow, McDonalds, Coke, G4S and the rest of the greedy tax-avoiding exploiting bastards (only £700m out of the £9.3 bn cost is funded by the sponsors), but the performers and athletes are the stars of the show from now on.

I noticed after I'd written this that the Arctic Monkey's first song had the lyric refrain "1984", so Orwell was present last night. Here's another gem I missed from Alex Wolff in Sports Illustrated: "Somewhere in the cacophony of last night, during what might have been the world's largest Twitter storm, this nugget emerged: Hey Jude was No. 1 on the charts the day Smith and Carlos raised their fists -- and that single's B-side was Revolution." Thanks to Noel Currid for this.

Not forgetting Danny's writer, Frank Cottrell-Boyce who did such a great job, including introducing Boyle to Henry Jennings's Pandemonium.

Ian Sinclair in LRB: My Olympics.

I wondered when this was going to happen. Danny Boyle Backlash: London Olympics 2012

Excellent article. Accurately judged, informative and sharply written assessment of a great party which I was well prepared to hate...but just couldn't.

Thanks, Danny. It certainly won me over. Such a pleasure that Boyle stuck his neck out like this.