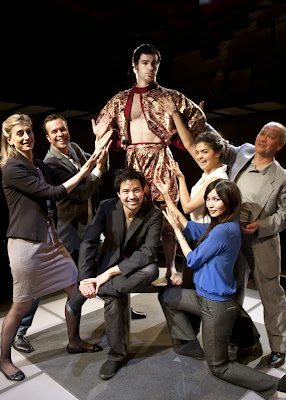 My review of Yellow Face in the Morning Star
4 stars

This smart and savvy comedy delivers a knock-out blow to any still-entrenched belief in certain crepuscular crannies of theatre land that east Asians can't produce culture.

Racism no longer has an outlet in blackface performance but yellowface lingers as a method of corralling an ethnic minority into a ghetto, depriving them of jobs and creative participation.

That's the context of the Obie award-winning Yellow Face, an admittedly autobiographical indulgence by David Henry Hwang which tells a funny and fast-paced story of his perennial war against the surreptitious devices used to keep Asians in their place, in particular the 1990s yellow-peril hysteria targeting President Bill Clinton and threatening to engulf American-Chinese people.

Having burned out as the "poster child for political correctness" in the battle of Miss Saigon - when American-Asian actors protested noisily against white British actor Jonathan Pryce reprising his part as the Asian engineer for the Broadway transfer of the musical - Tony award-winning playwright DHH (Kevin Shen) buckles down to work on his next play Face Value.

He inadvertently casts white actor Marcus G Dahlman (Ben Starr) in the leading Asian role and the subsequent cover-up reveals much more than it conceals.

Too sophisticated to lecture, Hwang skilfully navigates a series of real-life anti-Chinese events including the accusation that his banker father Henry (David Yip) is aiding an enemy - China - and the failed prosecution of Dr Wen Ho Lee as a nuclear spy for Beijing, harking back to the Rosenbergs' execution.

In reversing the situation and trying to manipulate his star Dahlman - "dollman," geddit? - Hwang exposes the absurdity of judging people by their skin.

It's the Siberian Jew Dahlman, building a successful career on an erroneous assumption that he is part Asian, who pleads: "It doesn't matter what someone looks like on the outside."

Hwang has long been respected as a writer of depth with an impressive body of work permeated by a progressive political perspective. In Yellow Face he argues that we should all be part of "the big song" as experienced by Dahlman, who finds peace and an identity with the Dong tribe of China.

Following last year's still-rumbling RSC The Orphan Of Zhao controversy, Hwang's long-awaited theatrical resurfacing in Britain after a couple of decades provides a welcome addition to the debate around representation of east Asians in this country's culture.

Interesting review- but if you're going to talk about US race politics, please please get the terms correct: It's "Asian American". (NOT, NEVER EVER "American Asian.")

Preferably without a hyphen between the words (although many US newspaper stylebooks use the hyphen, most politically astute Asian Americans refuse to).

And while you're at it, do also be aware that the US term "people of color" is a great term meaning "nonwhite ethnic minorities".

So please please get US race savvy and use the term that anyone who considers themselves Asian American uses.

Thanks for your interesting comment. I take on board your point about the correctness of Asian American over American Asian — I can only guess what you make of our "British East Asian" form.

I've been griping about "oriental" for years and now only use ironically it as a deliberately wry comment, so glad you share my dismay over its continued use.

'Fraid that for a Brit readership "nonwhite ethnic minorities" is as valid as "people of colour" (with a "u") depending on context. Sometimes labels put people to sleep so its good to use all the language available that does the job without pandering to conscious or unconscious racism.