In the Ai of the beholder: my theatre review of The Arrest of Ai Weiwei 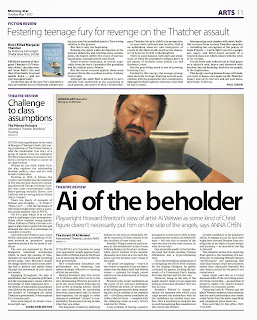 If martial arts functions by using your opponents' weight against them, then artist Ai Weiwei must be the Bruce Lee of annoying the hell out of the Chinese government.

Howard Brenton's play The Arrest of Ai Weiwei adds more art-fu to the mix, dramatising Ai's account of an 81-day incarceration following his 2011 arrest at Beijing airport. Bored into near-submission by paralysing inactivity punctuated only by shouty interrogations, Ai's struggle to rebut charges of undefined "crimes" is complicated by his accusers having no idea what they are either.

The longeurs created by depicting tedium in real time are thankfully offset by moments of black comedy from the excellent all-east-Asian cast.

Benedict Wong's masterly performance as this bewildered victim of state bullying fleshes out Brenton's outlines, while guard Andrew Koji's metallic thousand-yard stare at a two-inch distance was the funniest scary thing of the night.

The plods' art epiphany — that it is the viewer's response to the art object rather than the object itself that Ai values — prompts his single joyous outburst at human connection achieved.

Brenton's play is part meditation on the power of art, and part deification of Ai Weiwei the artist — or "artworker" as his yelling persecutors keep reminding him in the confines of his cramped cell, a brilliant mobile installation by Ashley Martin Davis, complete with the collapsing walls on every critic's wish-list for China.

A key problem of having a passive protagonist is that there's little to help us penetrate the symbol and behold the man: not only an enemy of the state but also his own worst enemy. So what drives him?

One admirable quality is that he bites the hand that feeds, sending Chinese officialdom into a hyperventilating tizzy.

Given the prestigious assignment of co-designing the Bird's Nest Stadium, he'd openly criticised the Beijing Olympics, inviting the animosity of a Communist Party hoping he'd take the bait and fall into line.

However, being on the side of the angels doesn't make you an angel, and being an iconoclast shouldn't turn you into an icon.

Brenton's Weiwei is simply too saintly for someone who wittily runs rings around the authorities with all the confidence his exalted class confers. He's a mischievous hedonist, but no such humanising flaw manifests in this Christ-like Weiwei.

Greater confidence in the audience's ability to engage across his faultlines might have rescued Brenton from creating him as an object of pure beauty and harmony — as decried by the Big Ai himself.

The climactic action of an inspiring final speech is the smashing of a neolithic pot, reenacting Ai's famous 'performance' signifying that individual human souls are priceless, rather than classically beautiful but safe objects prized by the party's art commissars.

Some might read this as a brutal demonstration of the overriding power of private ownership — an assertion of property rights over shared historic artefacts via economic power.

Flattering both Ai Weiwei and the play's western audience, the production and cast performance are considerably better than this slack, superficial and complacent piece deserves.