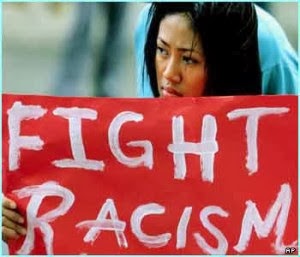 Alarming news emerges from the Edinburgh Fringe Festival: not only yellowface but now BLACKFACE is okay in its theatres, marking a throwback to majorly less enlightened times.

Three young east Asian women, Julie Cheung-Inhin, Emily Siu-see Hung and Anh Chu, were put through the grinder this week, when they went to see Beijing Cake, a Chinese-themed play at theSpace Venue 39. They watched a group of white, black and Jewish students from Yale University doing the ching-chong playground thang for 15 minutes, before walking out humiliated and upset. One has to ask: why would a young theatre company do that to their audience?

Actually, the fifties is a bit modern for this outfit unless you mean the 1850s, since the 19th century costumes spring directly from the anachronistic film and TV tropes which evidently fed their minuscule mindset. Guys ... READ. Extend your horizons. Meet some actual east Asian people. There were three in your audience the other day from whom you might have learnt something — like Julie who wrote this:


We stayed for 15 minutes of what felt like being slapped in the face while approximately 30 audience members laughed away.

The play starts off with two white actors and two black actors coming out in traditional Chinese costumes to perform a mock Chinese dance waddle that made our fists clench. The dialogue then began with the white American protagonist (Sarah Rosen) talking loudly and slowly to the black actress (Cassie Da Costa) playing Mie Hwa, asking how to say certain words in Chinese. Da Costa replied in a made-up “Chinese” language that was clearly meant to sound Chinese. (Indeed, it felt like “Chinky Chonky shu shu shu” mockery).

Later on when talking to the playwright, Rachel Kauder Nalebuff, about the “Chinese” used in the play, she explained they wanted to make up the Chinese language rather than use real Chinese (and let’s not even start on how old this language is!) so as to not offend the Chinese people.

We hoped that the joke or irony would come out soon, but when the yellow-faced black actor (Gabriel Christian) started to portray an elderly Chinese man chucking money at a white woman to buy her unborn child, we could take no more. Perhaps the most insensitive and hurtful part of the play was the portrayal of the ghost of Mao Zedong as a kindly paternal figure that Rosen’s character repeatedly goes to for comfort and hugs. A parallel of this would be painting Hitler or Mugabe as a friendly confidante.


Nostalgia for times past, when white dominance was rarely challenged, is creeping in everywhere. From theatre and popular entertainment to politics, angry white boys and girls and their dimmer sidekick Tontos are reasserting an obsolete pecking order. We bet our last prawn cracker they wouldn't dare do the black or Jewish version ... thankfully for our multi-racial friends who are viewing this with bemusement. We're all wondering where this bit of cultural kite-flying is leading us.

When the women spoke to the manager of theSpace venue where Beijing Cake was playing, he was less than helpful, replying never mind yellowface, blackface was all the rage in the US. *scary face* Ah! So! That's what's in the pipeline. That ain't no light at the end of the tunnel — that's an oncoming train. "He told us we were wasting our time. He blew the issue off by saying its all subjective and that we are the only ones that are offended."

It's not only about race. The elderly, the poor, immigrants — anyone who can be classified as "other" — we're all being crushed under the tank treads of the new producers of culture, the people who are supposed be dreaming for us ... but whose off-the-peg dream collection only fits some of us, and then only some of the time.

The sleep of reason now produces this sort of shrunken homunculus rather too often, with higher human faculties disconnected. My baby Marxism taught me that the cultural superstructure arises out of the economic base. If only I'd known it can sink right back in if the base goes tits-up, I'd have yelled louder and earlier. Call me the Flying Buttress (my magnificent flying butt yields to no man) but we are witnessing a descent into an ugly primordial sludge where we're being hardwired to react with fear and loathing. We need to look at how Beijing Cake represents yet another marker in the ongoing cultural implosion as the new order crystallises with the biggest social shake-out since the second world war. Cultural output reflects a major restructuring of the western economy in favour of an intellectually-limited and spiritually-moribund elite, with nothing better to do than consume on a grand scale and gestate mini-me versions of themselves.

So: yellowface and blackface, even today. What next? A ground-breaking Jim Crow revival?

Those who own society need court jesters to flatter them, authenticate and endorse their version of reality, reshape truths and render invisible threats and unpalatable facts. There are too many incurious entertainment industry shills willing to fill the brief. Once was a time when the Edinburgh Fringe was a byword for progress in the arts. Now it's just a showcase for those licensed sycophants.

Let's hope that the Arts Council's shrinking resources aren't funding any of these miserable shows or the venues which insult our collective intelligence by giving them house room. [Edit: to make it crystal clear, the Arts Council England didn't fund this particular schlock, thank heavens. I do hope ACE continues to remain alert to the lively wider debate about representations of east Asians that sprung up after the RSC Orphan of Zhao debacle.]
Posted by Madam Miaow at 8/21/2013 05:26:00 pm

Shocking stuff but well done you for highlighting it! It thoroughly amazes me how much more people think they can be racist against the Chinese nowadays. Interestingly when I recently went to the London Eye, there was a 4D film preview which was really well done apart from a scene with two white "yellowfaced" girls with Chinese umbreallas introducing a Chinese dragon dance. This was straight after a Bollywood number featuring "authentic" Indian performers. I don't think anyone else noticed apart from me. Sigh....

Maybe once very long ago there might have been a shortage of east Asian performers to do the Chinese parasol dance but there's no earthly excuse now. It all feels like we're going backwards.


George, the manager of Venue 39 indicated there was a shift in attitudes about racism in British theatre (and the RSC which IS ACE funded has illustrated this). I am trying to make a wider point in a bigger debate and expressing the hope that the Arts Council isn't involved in shows that might display the same mean-spiritedness as the Trojan Horse that got through in Scotland (ACE being Arts Council England).

It's also a plea that they hold the line and refrain from doing so in the future (More Light at the Arcola springs to mind).

I'm delighted that we are in agreement over the key principle here.

George, I see it was a bit vague and open to misinterpretation so thanks for drawing my attention to it. I've added an edit and hope that point's clarified.

Many thanks for your participation in the debate.

So this is how the white arts establishment deals with serious concerns regarding fairness, equality and race when caught out.

George, I have utterly no idea what you are talking about by my "editing" any names out. The only edit I made is the addition in square brackets as a courtesy to you because you had trouble understanding what I meant.

If you are insinuating the three women have embroidered their account due to nefarious motivations, you are sailing close to the very winds you threaten.

Taking the Beijing Cack cocks to task is a fair cop, George. Suck it up, guy.