HUGO mini review: a dramatic turkey with brass knobs on. 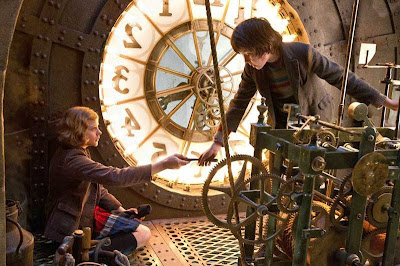 MINI REVIEW: Steampunk aesthetics and the history of cinema: what could go wrong?

I watched Martin Scorsese's Hugo last night and, although the visuals are stunning (I'd have loved to have seen this in 3D) the script was one of the worst things ever.

Snobby middle-class preciousness (the cute kids with Rank starlet accents nearly gave me diabetes) and dramatic ineptitude killed for me the story of one of the fathers of cinema, George Melies (Ben Kingsley). Sir Ben's muted appearance in the same film as Ray Winstone who played Hugo's evil drunken uncle had me longing for the last time I saw them paired up in Sexy Beast and wishing Melies would blurt Don's immortal line, "I'm sweating like a cunt". This would have given the lagubrious script a much-needed cheering up.

Two nights running I've seen Sasha Baron Cohen in iffy films (although this was still considerably better than The Dictator, a pale shadow of Borat and Bruno).

Reading the reviews and scanning the list of awards garnered (although not for veteran film editor Thelma Schoonmaker for clear reasons in my eyes), it appears that flattering the movierati guarantees good write-ups.

However, box office failure reveals the wisdom of audiences who stayed away in droves. A good yarn told well beats any amount of bells and whistles.