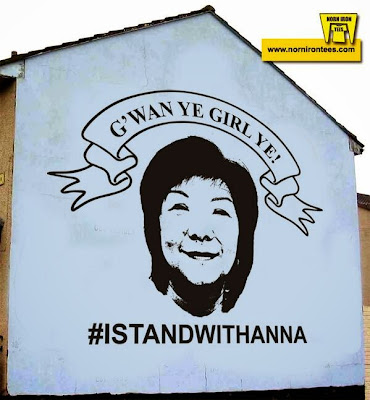 A positive story among the horrors of the European turn to the right. The UK's only parliamentary politician of Chinese origin — the Alliance Party's Anna Lo – has defied racists in Northern Ireland and will stay on in her job. Lord knows we need people like her.

It was bad enough that a Christian pastor in Belfast, James O'Connell, condemned the entire Muslim people of the world as following a "satanic" religion that was "spawned in hell".

Northern Ireland's First Minister, Peter Robinson, then inflamed the situation by agreeing with the rabble-rousing pastor by saying he would only trust Muslims to "go down to the shops". One wonders if he'd trust the loyalist mob who did go down the shops and chased Anna Lo out of Connswater shopping centre. Then there's Dineen Walker, Newtownabbey deputy mayor and Democratic Unionist Party member, calling Anna a racist. Which "satanic" dimension are these people inhabiting?

Imagine being a Muslim today in Northern Ireland. It must feel as if the First Minister has just painted a big target on you.

Name one religion or belief system that isn't a nightmare when it descends into fundamentalism.

The world is at war in various hotspots, we no longer love our neighbour ... it is the unholiest of messes and demagogues will always try and whip up hysteria against an entire group defined as "other". All other social and economic factors from which they themselves benefit are buried in a slurry of hatred: no challenge to the unneccessary austerity or the recession brought about by bankers' excesses which continue today. No serious measures to retrieve the billions in tax lost to evasion and secreted off-shore that should have been spent on health, housing, job creation.

Ed Miliband could do with learning from Anna Lo instead of capitulating to the Ukip agenda following their win in the European elections.

Anna Lo's defence of minorities dates back to even before she became the first ethnic politician to be elected to the Northern Ireland Assembly in 2007. Not just the Chinese, who were subjected to a mail-out from the loyalist marchers who rerouted their parade past her home in the year of her election, but Poles, Romanians, Roma and anyone in need of an honest politician.

Speaking on Channel 4 News, Anna called out the racism of personal insults she's been subjected to. She criticised the "outrageous" anti-Muslim comments of Pastor O'Connell followed by Peter Robinson's "ludicrous and negative comments about a whole race, about a whole religion" in a climate of rising racism. In answer to whether the First Minister had made it worse, she said: "That was my concern and my anger, seeing the rise in racism in Northern Ireland in the last six months, and for him to come up with such comments supporting … such negative sweeping comments about the Muslim community." She thought he should make a public apology and retraction in response to public anger or else resign.

Widespread support and a Twitter campaign with the hashtag #istandwithanna has persuaded her to stay and continue her work.

Robinson may well have breached the rules of Stormont's Code of Conduct. Even Ian Paisley's son, Kyle, has called him "a condescending ignoramus", (although this was somewhat marred by his description of the DUP politicians' cowardice as "yellow". Still, it's the thought — or lack of — that counts). Decent politicians should give this brave principled woman maximum support — she is a model for us all.
Posted by Madam Miaow at 5/31/2014 11:51:00 am

I like your blog. Just a question: is Islam a race? If religious fundamentalists need to attack each other that is one thing, but it is not racism. However, many black African Christians are being murdered for their faith. There might be a racist issue there. I must declare an interest. I campaigned against apartheid and have recently been supporting the indigenous people of South Africa who are being exploited by multi national companies engaged in bio-prospecting. Best regards.

Islam is not a race but it is associated with brown people and is siezed on by racists. On the same day as the anti-racist rally at the weekend, thugs broke into a house occupied by Pakistani men and assaulted one of them. Jamaicans have also been targeted. The comments from the pastor and First Minister inflame racism, legitimise hostility and reinforce "othering". Why don't they tackle poverty, austerity policies and the roots of housing and employment problems? Why don't they rail against the super rich and condemn the concentration of wealth at the top, the billionaires, the tax dodgers, and so on? They come on like snake-oil salesmen.

Hello Anna, just catching up on your blog - on a related note I'd like to mention a play currently on at Soho Theatre - Quietly - on the subject of the deeply personal impact of past N Ireland sectarianism still playing on communities - intense performances leading to the point that the prejudice has moved on to other, foreign targets. I think you'd appreciate - if so, good to know what you think.

Thanks for the info, Elena.