The vast lobby of the Victoria and Albert Museum had been turned into the sort of joint where beautiful young men and women press cocktails and bubbly onto you as soon as you walk in. Mini canapés appeared transported on futuristic illuminated platters like something out of the Korova Milk Bar in Clockwork Orange.

Yes, here we were at the David Bowie Is launch party, surely the music event of 2013.

We sipped Green Genies: vodka martinis with lychee juice and absinthe. The orange cocktail was the BEST! Passion fruit juice, vodka and ginger ale over crushed ice and sipped through a straw. I had four of those (see how pink I am in the photo?), came back home and caught Tescos open. Tried to buy the ingredients (I was pissed and not thinking straight, only I WANT) but was vetoed by CSM who bought me Irish Cream faux Baileys instead. Not the same. But I got to use my new Bowie tote bag. Which is orange.

The exhibition is huge and begins with oranges. (I'm spotting a colour theme.) I can't possibly do it justice in 400 words but every corner yields something fascinating: the handwritten cost for a recording studio session (£149); videos; drawings; costumes galore.

It opens today. You have until August 11th to catch it when it begins a world tour. Some 47,000 advance tickets have been sold so hurry up and book. 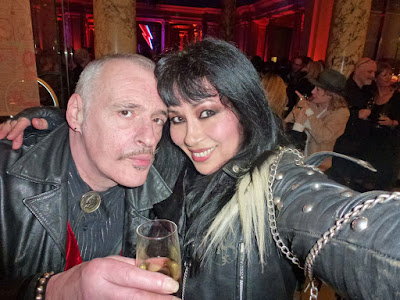 So here's my review for the today's Morning Star.

Nearly a decade with nary a squeak from the house-husband, and suddenly this embarrassment of riches arrives, hot on the heels of his new and most excellent album, The Next Day.

Here I am praying at the altar of David Bowie, the eagerly awaited launch of his very own exhibition at the V & A museum. My heart throbs, my eyes goggle. I'm falling in love all over again.

One glance at the heaving crowd and I realise that there's a new measure of wealth and taste. Forget tight buns: the mark of today's pampered elite is a tight face.

On entry, I am immediately transported back to my childhood as a serious Bowie kiddie, camping out all night to secure front-row tickets at the Hammersmith Odeon and Kilburn State Gaumont, and glimpsed in the DA Pennebaker Ziggy Stardust movie.

The radio-headset is a vital part of the experience, surrounding you with super-duper 3D audio as you walk around. I wasn't sure what the Carl Andre floor tiles were doing in the first bit but it sets the scene for Bowie as Serious Artist, a status the rest of the exhibition confirms.

This extensive selection from the Bowie archive has everything a fan could wish for, barring the presence of the great man himself. From his earliest artistic influences (Warhol, Burroughs), his first appearance in the public eye as spokesperson for The Society for the Prevention of Cruelty to Long Haired Men, the space race (Space Oddity, Starman): welcome to Bowie World.

The scraps of paper on which Bowie scribbled lyrics and notes demonstrate that this wasn't someone merely churning out product: this was someone in the seat with the clearest view of worlds of imaginative possibility.

Many of the costumes on show seem strangely drab and unmagical without Bowie filling them out, but the wing-legged Kansai Yamamoto outfit shines (literally), as does the bizarre black and white one-piece (influence Sonia Delauney) beside a screen depicting it in action for Bowie's stunning 1979 performance of The Man Who Sold the World on Saturday Night Live.

By the time we reach the final hall where thirty-foot-high Davids and Micks sing to us, I remember why I fell for him the first time round. I'm ready to do the whole thing again. 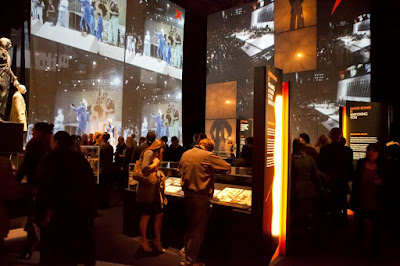 Wow!! Love the review.. Place you would want to be.

Tilda Swinton was there. Love her.

Absinthe!! Always think of Toulouse-Lautrec. Always wanted to try it. But the cocktails just sound great, as does the whole experience of the exhibition.

Must go and see it at some time. I have a list of exhibitions I have to go to in London.

Yep, now I want to do the Pompei exhibition at the British Museum.

Charles Shaar Murray is doing some sort of Bowie talk at the V&A on the weekend Fri, Sat & Sun April 26-28th.