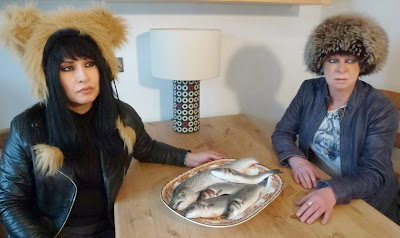 Spent an enjoyable Sunday with my mate Deborah Evans-Stickland — she of the Flying Lizards and the definitive version of "Money" (1979, written by Berry Gordy in the 1960s) that you hear played every time there's an item on ... er ... money. Given that we're in the pits of a recession that's fast turning into a depression and financial meltdown at least for us poor stiffs at the bottom of the heap, that's a lot.

I was too spaced out from a week of bronchitis and pain to get behind a steering wheel so she picked me up in NW6 to go to Blackheath in South East London where TV cameraman Jeff Willis was going to video us with his home kit for a laugh. On a map of London — North West to South East — that's top left diagonally to bottom right.

Deborah arrived late with Mab the (possibly pregnant) husky because she'd neglected to bring a satnav and took a weird route. She'd stopped to ask directions and been given the "You don't want to start from here" answer which quite delighted me.

So we set off late and in the rain. It's amazing how much traffic turns out when it's raining, even on a slow Sunday like today.

"How do we get to the South Bank?" she asked me.

"Oh, down Abbey Road, cut though Camden and head for Waterloo Bridge." (Down and our left.)

This will mean nothing to those unfamiliar with our fair capital city but we ended up going down Abbey Road, west to Notting Hill, down through Hyde Park, and through Victoria. Instead of turning left for Westminster, we carried on south to Vauxhall Bridge, along the north embankment past Tate Britain, Millbank, Parliament Square and across the bridge to south of the river and no-man's land. To me. Elephant & Castle, Peckham, Deptford, Blackheath ... Instead of a nice straight line from top left to bottom right, we'd done a wide letter "d" and were now adding more letters of the alphabet.

A short detour for sushi, sarnis and a bean salad from an M&S refreshed us for the next leg of the journey and we were off again.

In front of the camera, I asked: "So, Deborah, the iconic track 'Money' gets played a lot. Every time we hear it, does your bank balance go 'kerching' or does a kitten die?" Disappointingly, it doesn't go "kerching" but she did make one of the iconic records of the punk era, so who's counting?

We did good interview, everyone got fish and I directed us home — a straight line this time. But the unexpected deviations can't half be good fun when you're with a mate.