Higher wages won in Seattle supported by electorate: Ed Miliband should watch this 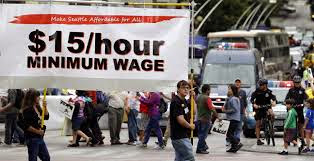 Workers across America are winning a living wage.

Halfway decent minimum wages work … certainly better than what we currently have. An important principle is grasped in America and is spreading. Let's hope the same happens here.

Ed Miliband should remember this when the Labour right are pressing him to emulate Ukip.

Will Hutton writes in the Observer:


Last Monday, the mayor of Seattle signed into law a city-wide minimum wage of $15 (£8.90) an hour. … chronically low-paid work does not make any sense. It is bad for business. It chokes demand for goods and services, even for fast food. There is no worker loyalty or commitment, just a mass of desperate, distracted men and women permanently on the look-out for a better job. … "People look at the $27bn (£16bn) in profit Walmart makes every year and they celebrate it without connecting it to the fact that Walmart workers are the biggest recipients of food stamps in the country and are all in poverty." But, Hanauer adds: "If you say to them, look, we can live in a world where Walmart made $17bn (£10bn) in profit and each one of the million lowest-paid Walmart workers would earn $10,000 (£5,900) more a year and all of them would be able to buy more stuff from your business, and you don't have to pay food stamps, then they're like, 'Oh, shit, we should do that!'"

Aditya Chakrabortty on rising poverty while the rich get richer.

...when Ipsos Mori asked the public this spring which issue they considered the most important in Britain, poverty/inequality had its strongest showing ever, ranking above schools, hospitals, crime, inflation, pensions and housing. … Branson and the train operators, who make easy money for investing next to nothing; the utilities, which pay their investors handsomely, pay the taxman next to nothing and expect the British public to stump up for their investment; Serco and Capita and G4S, with their business models of running public services for as much profit as possible.