Allow Gaza to exist, end the blockade and build a viable Palestinian state if you want peace 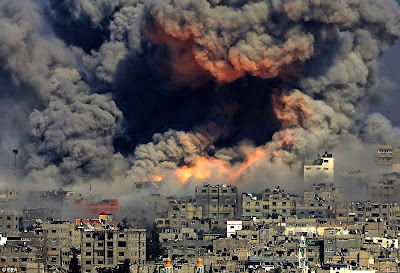 Israel should end the siege, end the blockade and allow Gaza to grow.

There's only one people being pushed into the sea right now and it's Gazans. A coastal sliver about 25 by seven miles — an area of 360 sq km into which 1.8 million people have been rammed, 60 per cent of whom are under 18 years old — Gaza is one of the most densely populated areas in the world.

Much is made of the rockets launched from the tiny strip. It should be noted that no rockets were fired for the first 34 years of military occupation by Israel. Those that are fired are far from the same scale as the 6,800kg monster ordnance payload per aircraft delivered by the occupying force. The maximum payload of biggest rockets fired from Gaza is 144kg, the most common Qassam missile 9kg, according to the IDF.

Since November 2012, when Israel broke the original ceasefire and killed the Hamas peace negotiator, it has violated ceasefires with its vastly superior firepower 191 times. In the same period, there were 75 violations by Palestinians. In addition, Israel has broken 65 UN resolutions and continues to build illegal settlements in the West Bank.

And what does an Israeli ceasefire mean? Constant drones threatening obliteration for people who have no underground shelters. A sadistic reminder that Israel has the power and is gagging to use it in scenes reminiscent of the Capitol terrorising the 12 Districts in The Hunger Games.

Bibi Netanyahu makes a great President Snow. His casting credentials range from approval of the Yitzhak Rabin sniper target posters to indiscriminate killing and collective punishment of Palestinians under siege.

This eye-witness account of daily life for Palestinians from Brian Eno in the Independent newspaper, is similar to what I've heard from Jewish friends who were originally sympathetic to the state of Israel until they saw what was happening in their name:


'I was in Israel last year with Mary [a mutual friend]. Her sister works for UNRWA [the UN agency for Palestinian refugees] in Jerusalem. Showing us round were a Palestinian – Shadi, who is her sister’s husband and a professional guide – and Oren Jacobovitch, an Israeli Jew, an ex-major from the IDF [Israel Defence Forces] who left the service under a cloud for refusing to beat up Palestinians. Between the two of them we got to see some harrowing things – Palestinian houses hemmed in by wire mesh and boards to prevent settlers throwing shit and piss and used sanitary towels at the inhabitants; Palestinian kids on their way to school being beaten by Israeli kids with baseball bats to parental applause and laughter; a whole village evicted and living in caves while three settler families moved on to their land; an Israeli settlement on top of a hill diverting its sewage directly down on to Palestinian farmland below; The Wall; the checkpoints… and all the endless daily humiliations. I kept thinking, “Do Americans really condone this? Do they really think this is OK? Or do they just not know about it?”'

A former Israeli soldier has gathered evidence that the army allows their soldiers to kill Palestinians for revenge and confirms that the young man in the green T-shirt, Salem Shamaly, was murdered in Shujaiya out of malice.

It's well known by now that the group suffering the most are the children. Plus over 400 kids killed out of nearly 2,000 and thousands injured where hospitals are bombed and the importation of medical equipment and medicine banned by the blockade.

We've seen the sheer recklessness in putting human life at risk turn into outright viciousness, targeting UN schools housing terrified refugees because rockets were fired "near" them. Not from the schools themselves, but "near" is near enough to obliterate dozens of innocents taking shelter. No, Hamas should not hide arms in UN schools, even if they were empty at the time — however, the response has been entirely disproportionate and savage.

As has been Dr Mordechai Kedar, an Israeli scholar of Arabic literature and a lecturer at Bar-Ilan University, who says rape of wives and mothers would deter Palestinian combatants. The Israeli far right are openly talking of "genocide" as a solution, their politicians about mass murder and a future in tent camps in what is already the biggest concentration camp in the world. The peaceniks and measured commentators such as Gideon Levy of Haaretz are harassed and endure death threats.

We've seen all this and yet the disinformation, the diversion, the smoke and mirrors come thick and fast. However, the truth will out in this era of social networks. Claims that Hamas uses human shields have been unpacked. Religious claims to the land have been rebutted by rabbis and scholars. The three Israeli youth murdered in a criminal act which Hamas has denied ordering, was cynically used by Natnyahu to whip up anti-Palestinian hatred even though he knew almost immediately that they'd been killed, ignoring the two Palestinian boys shot by an Israeli sniper shortly before in May and all but forgotten, because some lives count more than others. The Nation debunks the most common five points of Israeli propaganda.

Israel is an international pariah but responses of revulsion and horror are in danger of turning into a wave of anti-semitism. However shocked we are, we should be wary of calling Israelis Nazis even when they're behaving like the worst heartless, selfish, far-right thugs. And on the other side of the coin, when Netanyahu tries to conflate all Jews with Israeli zionist expansionist ambitions, it's vital to keep the two separate. I am told by a British Jew that the biggest threat to the Jews of the world is Israel.

The discovery of a huge gas field off the Gaza coast ten years ago by BG (formerly British Gas) should have ensured the construction of Gaza as a viable self-supporting entity. But this may well have sealed its fate as the land grab is joined by a gas grab.

Some suspect that Israel is using the conflict as a showcase for the arms industry.

There are the Hasbara secret propaganda booklets.

Even middle-of-the-road Emily Maitliss has had enough with Israeli spokesperson Mark Regev:

The Tricycle Theatre issues a statement after the Jewish Film Festival pulls out after refusing to drop Israeli Embassy funding. The Tricyle offered to plug the funding gap but this was declined in an increasingly bitter one-upmanship.

Non-action by Arab leaders by Mehdi Hassan in the Huffington Post.

The Economist has collected facts and figures about Gaza and Israel.

Hamas agrees to 1967 borders in 2006 and says it will recognise Israel in return for a Palestinian state in West Bank and Gaza. On 24 April 2014 they formed the Unity Administration with Fatah, they also agree talks should be resumed regards the Two State solution. Hamas's 10 demands for peace.

Nafali Bennet, leader of Jewish Home and coalition partner of Likud: "There will never be a peace plan with the palestinians"

Questions to ask your pro-Israeli friends.

There are moves to organise a boycott of Israeli goods including boycott, divestment and sanctions.


Chinese for Labour call on Government to condemn the collective punishment of Palestinian civilians
The recent and devastating events in Gaza have created a response from countries and nations from all over the world. The endless and tragic images that show the scale of the humanitarian crisis arising from the conflict between Hamas and the Israeli army has moved many people across nations and communities to demand Government’s secure a peaceful solution.
The numerous large scale demonstrations, vigils and protests that have taken place over the past month across every part of the United Kingdom has united groups and communities together in pursuit of preventing further deaths and injuries of Palestinian civilians.
Members of the Chinese community across the UK have responded equally as compassionately to the situation in Gaza, and Chinese for Labour call on our Government to condemn the collective punishment of Palestinian civilians and are in agreement with the statement issued by Ed Miliband that acknowledge the ‘disproportionate’ actions taken by the Israeli Government in the conflict with Hamas.
The loss of life is deeply regrettable on both sides, but the number of children and civilians involved in this conflict is an issue that communities across the world have rightly spoken out against.