The entire population of China sued by New Yorker 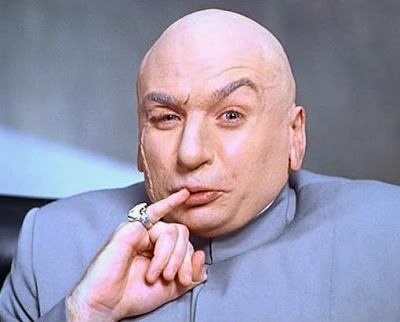 The biggest lawsuit ever, TTIP legislation and vulture capitalists.


Anton Purisma, the man suing New York City for more money than there is in the world, has just taken out an action suing Ed Snowden and the entire population of China for the rest of the money that doesn't exist in the entire known universe.

According to a Yahoo report:


Anton Purisima has filed his two undecillion dollar lawsuit after he claims his middle finger was bitten and infected by a "rabies-infected" dog on a city bus, that he paid more for coffee than he should have at LaGuardia Airport and a Chinese couple took pictures of him without asking.


I can't find what it is that the Peoples Republic of China have done to him to deserve their lawsuit but a Chinese couple (or they could have been Korean or Japanese) photographed him in his dog-bitten misery so maybe he holds China responsible. Why not? Everybody else does.

Talking of "does", in his hand-written upper case lawsuit, he includes: "Does (as in "John Does") 1-1.3 BILLION, DEFENDANTS."

Ah, yes, there it is: "Illegal dumping (of 'cheap') & defective 'China-made-and-over-priced products.'"

Before we laugh off the biggest suer in the world, let's not forget the TTIP EU legislation enabling vulture capitalists to sue governments for every penny of debt until they own the world. So far, Anton only wants your money. He doesn't want you in slavery in perpetuity.

Thanks to Adrian Chen for the hat tip on Twitter. 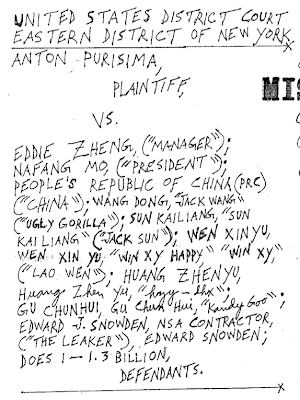