Doctor Who "Deep Breath" review: all hail Peter Capaldi, shame about the script. 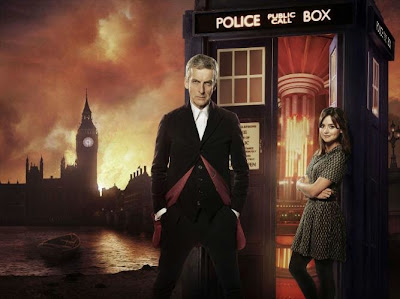 Why is Peter Capaldi flashing his red bits like a lady baboon, and other questions.

The Dalek was eyeing up some poor bastard on the far side of the room. It hadn't yet seen me, so I backed away. Far scarier in the actual metal than on screen, its presence only three feet away sent my heart pounding to 11, so loud it was sure to hear me. It swung round and I froze, skewered by its cyclops stare. Me and a Dalek. Eyeball to eyeballs. An inhuman rorschach inkblot of a creation, sucking out all the dark matter in my soul and planting it into this single embodiment of EE-vuhl. It waved its sink-plunger at me and I took another couple of steps back. People laughed, my mother among them. Surely a nervous, entirely inappropriate, reaction to the horror before them? I sensed another malign presence. I slowly turned to where the people were looking and tittering ... to find a Cyberman bent right over me, arms outstretched for a bearhug.

I screamed an eight-year-old's scream and ran as fast as I could, missing the Cyberman's grip by a whisker, past the Ice Warriors, the Monoids and the Fish People, and screeched to a halt before the Yeti blocking my way outta here. A moment's relief because the Yeti was surely just a big teddy bear. All that cuddly fur waiting for a kid to snuggle into. But this was no oversized furry playmate: this was a sinister, silent, unbelievably huge furball with fangs and a bad manicure standing between me and the exit. I stared at it, suddenly aware of depths of alien viciousness. Knowing I was beaten, I broke into a fit of weeping and heard the laughter rise. I swear that Yeti was heaving along to the jollity. It shifted a little to one side leaving a space just big enough for me to squeeze through and then made a final swipe. I yelped and leapt several feet in one bound, vowing I would return one day to vanquish the monsters that had landed at the Daily Mail Ideal Home Exhibition.

That was one of the few times Doctor Who ever pressed my terror button. Doctor Who was always about the permanance of the British empire and our values; as much in the outlands of space and time as here among Britainland's acres of melamine and fresh paint. Why else, after 51 years, is there still a white male at the helm of the Tardis aided by a trusty gurl assistant? Terror was the series' way of reminding you how lucky you were to be alive at such a secure, stable time ... if you lived in the British Isles rather than, say, post-second-world-war Korea, Yemen, Kenya, or Malaya. Any disruption of the status quo was certain to be corrected by the Doctor, with equilibrium restored by the end of the series and our place in the universe nailed.

Nuthin' changes except when it does. This year, for its twelfth reincarnation and eighth series of the modern reboot, Doctor Who goes full-tilt steampunk, calling once again on the Victorian era for validation in a world that's a little less secure, a little less reliable. Terror springs from newscasts and comes knocking at the door. Casting Malcolm Tucker (who bears a passing resemblance to actor Peter Capaldi) is inspired. Gravitas, grit, a laser tongue and a weary intelligence far beyond that of the mere mortals surrounding him make him the perfect Timelord in this, our hour of need.

Sadly, 'Deep Breath', the first episode of the long-awaited new series introducing Capaldi, inhales superb production values, along with some solid acting, but exhales a godawful script from Dr Who veteran Steven Moffat. Dwahlinks, you call that DIALOGUE? Monologues, more like: with declamations to the audience requiring actors to remain rooted unresponsively to the spot instead of reacting the way people, you know, react! The old vagrant and the robot boss have to freeze and endure long narcissistic screeds of character-establishing bollox that should never have made it out of Moffat's notebooks.

The episode opens promisingly with a Godzilla-scale tyrannosaurus rex as the chosen delivery method of the Tardis, the new Doctor and his companion, Clara (Jenna Coleman). After terrorising London, it is swiftly dispatched by a gentleman cyborg who harvests humans for body parts and requires some dinosaur optical nerve; although how first incinerating the creature aids raptor recycling is never made clear. The story then unravels with one damn thing after another rather than pearls finely strung to develop a complete whole: a meandering scene concerning a bad-smelling homeless man, some absurd short-cut ratiocination from Madame Vastra (Neve McIntosh), and lo-o-ong event-free dialogue in Mancini's restaurant. You know it's an idiot-plot when the heroes stumble on their nemesis as he's recharging and don't even unplug him. Clara is saved from the cyborg's cannibalising restaurant by the crimebusting Paternoster gang. They escape by taking the deep breath of the title and holding it, thereby avoiding detection by the murderous bots who only want to find their "promised land". The Doctor, still befuddled by the stresses of his regeneration, may or may not have pushed the cyborg gent out of his human-skin balloon at the clunking denouement, although suicide under the torture of being forced to listen to him rant while barely getting a word in edgewise, isn't ruled out. There's not a lot of outwitting going on.

When Joss Whedon-manque Russell T Davies first rebooted the franchise, his achilles heel was his adoption of the surface characteristics of Buffy and Angel with only the slimmest understanding of how plot and character interact, resulting in relentlessly annoying hysteria and a lack of story dynamic. He gave us sentiment instead of profound emotional involvement, lurches instead of arcs-within-arcs that dipped and soared along with our spirits. Bad habits have stuck.

I was always shown (and told!) that the rule was 'show, don't tell'. The Doctor babbles exposition like a mofo in a stinker of a script in search of a storyline. Note to producers: making characters talk 13 to the dozen like coke-fiends doesn't mean we won't notice little things like plot-holes and entire missing throughlines. Have none of you heard of PACING? Longeurs stretched into longdays as sub-Buffy banter held up the promised action while we were expected to genuflect before the awesomeness of Moffat's one-liners, a vanity process not far removed from pounding rock for diamonds — yes, there were a few but by the time they surfaced I was too exhausted to care.

You can lesbian-lizard-snog all you like in order to establish your LGBT credentials, but class hierarchy is alive and very unwell in the world of Doctor Who. Any subversive value resides in the relationship between Lady Handbag, Madame Vastra, and her maid-wife being normalised, not hollered triumphantly every two minutes. Uncool! Why're we back in very unsubversive days when maids and butlers were the norm (know your place, kids), and where the white "ninja" maid appropriates eastern skills but the only actual East Asian (Clem So) in sight is a robot? Reactionary mindset leaking at the edges? Even Harry Potter had an East Asian girlfriend until she was dumped for a white girl under circumstances never satisfactorily explained. In fact, not much ethnic minority presence at all in this one.

And why does the Doctor keep exposing his frock-coat's red silk lining like a lady baboon flashing her in-oestrus labia? So many questions, so much left dangling.

We wade through a swamp of exposition so thick you could stand a spoon up in it. The origins and rationale of the cyborg aliens aren't revealed through the clever workings of the script: Capaldi has to bark them out while the cyborg stares glassily, politely waiting for him to finish.

The cyborg's not too bright, anyhow. Eons of farming humans in order to make a skin balloon when he could have used whatever material Victorian dirigibles were made from, or simply bought some animal skins from the local abbatoir?

The funniest moments are owned by Strax the over-literal butler (Dan Starkey) whose knocking out of Clara with a rolled up copy of The Times was authentic laugh-out-loud slapstick.

Clara goggles her way through like someone who's been told she has pretty eyes (which she does) and has given up blinking for fear of hiding them. Her shrill tantrums have been praised as the mark of a strong woman. Surely, the critics have mistaken petulant for "feisty"? Having her throw strops and hissy-fits at inappropriate moments is a singularly ham-fisted method of telegraphing that this is not your dad's submissive Dr Who companion but an incredibly dated Grrrl Power trope that the BBC has only just twigged exists. Brattish and bossy when she could be co-operative, sensitive and insightful (but there I go again, talking about myself: it's catching), Clara is the template for the privileged breed of management who climb up the echelons of the BBC and walk off with those million-quid payoffs. FFS, don't try this at home, kids.

"In the name of the British Empire," cries Madame Vastra as her gang perform their rescue. Drip, drip, drip. Doctor Who is the hard-wiring of young minds into the values of the Establishment, not those of our real British society. The post-war period of freedom and relative prosperity for the masses is at an end, the party's over and the Doctor has reincarnated into the child-catcher. Protect your tender budding brains. Retain your critical faculties even as you chow down on your (intermittently tasty) comfort food. 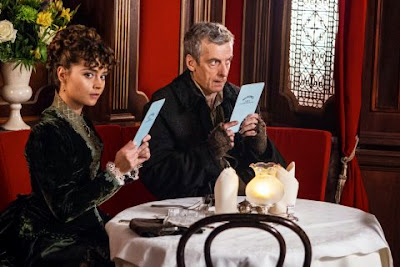 An ideological battleground. Review of Doctor Who season finale: Death in Heaven.