Lauren Bacall dies at 89: Bogey and Slim reunited in the hereafter 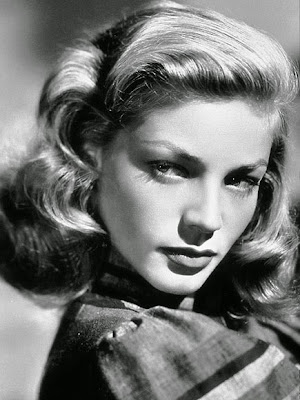 Oh, this really, REALLY hurts. Yesterday Robin Williams passed away; today, I find out that one of my all-time favourites, LAUREN BACALL, one of Hollywood's great beauties, also died aged 89.

Bronx-born Betty Perske was the star of To Have and Have Not at 19, going on the weave her screen magic in The Big Sleep, Key Largo and How To Marry A Millionare when they grew proper screen goddesses in America.

Wooed by 44-year old WASP Humphrey Bogart, her co-star in To Have and Have Not, she was so horrified by the casual anti-Semitic banter among her movie industry friends that it took a while before she felt safe enough to admit to her lover that she was Jewish. Thankfully, it wasn't an issue.

They married, had two children, came out as leftists during the McCarthy political witch-hunt era and were then scared off, leaving them open to unfair charges of being rat-finks but they avoided the blacklist.

I saw her on stage in Tennessee Williams's Sweet Bird of Youth in London and was mesmerised.

"You know how to whistle, don't you, Steve? You just put your lips together and blow."

My poem about Lauren ...

Ode To A Detox On Returning From St Ives

I'd hoped to grow old like Lauren Bacall
Elegant, willowy, tall
Tight arse, tons of class
An enigma on a pedestal.

Once slender and considered quite tasty
In a thin thong and pasties
The pasties are now Cornish pasties
And I can't thing the thame thong without crying.
My legendary six-pack is now a six-pack of cider
My inner Size Zero grows a whole lot wider
Finds the hacksaw hidden inside the cheesecake
And hacks her way free,
Pausing only for a swift one with pork scratchings on the side
Deep fried.
If only I ate apples instead of being shaped like one
I am a woman of many appetites but fruit salad ain't fun.
My overactive mandibles leave love handles the size of trees
I love my food but my food hates me
Treacherous, it deposits clues
In my jelly belly
it's a jelly belly, it's a jelly belly, it's a jelly belly, it's a jelly belly
I tried sleeping with the fishes
Even they didn't fancy me
They flashed their fins and went upscale
And threw me out of the sea.

A whale washed up
A chubby cherub after the Fall
I roll across the land, a shapeless fog
Devouring all in an epic trawl.
I wish the fog was a pea-souper
‘Cause I could scoff that an' all
Scarf the lot like a hog.
Nom, nom, nom.
No! This lardy bard must recall
Lauren Bacall was no butterball.

Fat threatens to settle in folds,
In rolls of old cholesterol.
The make-up thickens
Like clotting cream
Like several inches of plasticene
Like fossil strata from the palioscene.
My bags are now luggage
My breasts are baggage
In body angst overdrive
My reflection is savage.
I will rivet closed my gaping maws
My beak snaps shut
My greedy paws gathering greenery
My jaws chewing up the scenery
Filling the hole inside me,
‘Cause I recognise the metaphors.
Grimly I scan the vision before me
And understand why no-one adores me.
I do not enthrall like Lauren Bacall
Tons of flaws, open pores,
I'm growing old like Diana Dors.