Chinese originally Black like everyone else who left Africa 100,000 years ago 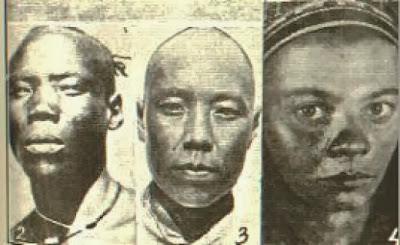 Refuting claims that the Chinese are a separate race of Peking Man — an earlier branch off homo erectus prior to homo sapiens — Jin Li, a Chinese doctor, did mitochondrial tests on thousands of people in 2010 and concluded that they were wrong and we'd all walked out of Africa some 70-100,000 years ago.

Non-Africans have an estimated 3 per cent DNA from Neanderthals (with 20 per cent of Neanderthal genetic code existing in the global human population today): could that give Caucasians their brow ridge and deep eye sockets? However, we are all Homo Sapiens and all the same species.

How often have I looked at Black people and seen my nose, my cheekbones, my lips, the other faint traces of a distant cousin?

If a group is cut off and interbreeding, certain characteristics will gradually come to the fore such as paler skin to deal with less sunshine, narrower nostrils for colder climates, and so on. How come the epicanthic fold on east Asian eyelids? They are linked to a flatter nasal bridge and are also found in the San people of southern Africa, Arctic people such as the Inuit, and some European Slavs.

Zhoukoudian National Park has the relics of Peking Man who lived 500,000 - 200,000 years ago and had learnt to control and use fire. Thanks to Jin Li's DNA research, we now know that this was an earlier, separate branch of humans, and not the beginning of the Chinese race.

Research shows "Mitochondrial DNA Evidence for a Diversified Origin of Workers Building Mausoleum for First Emperor of China". That diversity means mostly Han plus workers from southern Asian, a few from the North and a scattering of the ancestors of the Japanese. However, stretch the imagination I can see the movie starring a scarred old ancient Brit played by Russell Crowe.

A couple of interesting articles for further reading: Rasta Livewire's Ancient Black Chinese from Eastern Africa by Professor Jin Li and thanks to Alan Mitchell for showing me Kulture Kritic's DNA Evidence Proves that the First People in China were Black.
Posted by Madam Miaow at 2/14/2014 01:12:00 pm

Well, my Sistah, when dem com wit diversity like it a nu ting, we ha fi put dem straight, seen?