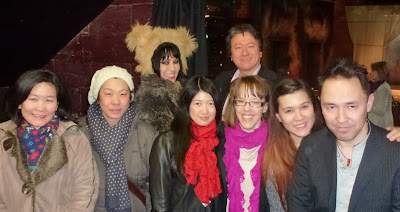 An open letter to Ed Vaizey and heads of broadcasting from the British East Asian Artists group.

We read with interest that the UK Minister for Culture, Communications and Creative Industries, The Right Honourable Mr. Ed Vaizey, has expressed concern about the number of black actors who are abandoning Britain for America because of lack of opportunities here. We welcome the concern that Mr. Vaizey and the media at large have expressed on this issue recently. We also welcome his determination to make meaningful changes in this area. In our opinion such an initiative is long overdue.

However we hope that these concerns and efforts will include all minority ethnic groups and not just the catch-all “Black & Asian”. As a group that fights the cause of British East Asian theatre and screen workers, we would like all parties to keep at the forefront of their mind that Asia continues east of India and that East Asia (particularly the East Asian “diaspora”) is not just “Chinese” and “Japanese”.

East Asians are the third largest minority ethnic group in Britain today. We are also the fastest growing and arguably the most diverse.

This is simply not reflected on our stages and screens at present and never has been.

China, Malaysia, Hong Kong and Thailand are among the top ten senders of international students to the UK, which by the government’s own statistics contributed 75% of the UK’s total education export income worth £17.5 billion in 2011. British East Asians contribute much to the economy and general make-up of the modern United Kingdom and to be continually ignored and passed over in this way is surely unacceptable.

As said, we welcome the ministerial and media concern about black actors which is no doubt largely as a result of the recent success of Chiwetel Ejiofor and Idris Elba.

Let us remember though, that, despite the lack of challenging opportunities, both Chiwetel and Idris had successful enough careers here to enable them to start up in the US.

No such opportunities (barring literally one or two “tokens”) are afforded East Asians in Britain. Recent successful “China plays” aside, East Asians are not seen in our popular media.

The hospital dramas, Casualty and Holby City, have featured only three young East Asian regular characters each despite the high number of (diverse) East Asians working in our health service. Coronation Street, set around Manchester with its long-established Chinatown, has featured only one East Asian character (a female Chinese immigrant) in its entire history.

East Asian males are rarely seen on our screens and mixed-race East Asians are particularly rare, not fitting the generic “Chinese/Japanese” stereotype. When East Asians are featured they are nearly always heavily accented, the women passive and submissive, the men brutish, asexual and devoid of any individualistic character. East Asians are, more often than any other minority ethnic group, rarely seen as indigenous.

In discussions around equal opportunities and social inclusion we therefore urge all parties to consider the full extent of Britain’s multicultural make-up. On our part, we feel that East Asians have been seen as the “model minority” for too long. High-achieving, silent and largely invisible. We feel this needs to change now.

British East Asian Artists (BEAA) is a pressure group comprising actors, performers, writers, film-makers and academics who came together during the controversy over the Royal Shakespeare Company’s casting of the Chinese classic The Orphan Of Zhao with just three actors of East Asian descent in a cast of seventeen with all three in roles described by critics as “minor”. The social media protest initiated went global and resulted in the Arts Council and Equity sponsoring the Opening The Door To East Asians In The Theatre event last February 11th 2013. BEAA’s objectives are to raise the profile of East Asians working in theatre, film and TV and to enable people of East Asian descent to make, and have access to, performing arts work.

Chronology of the RSC Orphan of Zhao campaign ("Zhaogate")": http://madammiaow.blogspot.co.uk/p/rsc-orphan-of-zhao.html

Press pick up on the BEAA letter to Ed Vaizey.