How the banks are going to own EVERYTHING: the Vampire Squid, Bill Clinton & Glass-Steagall 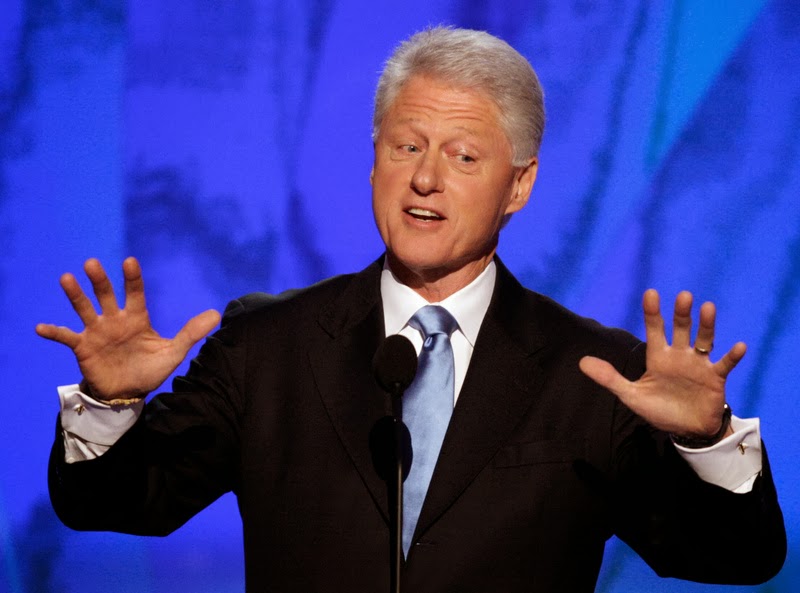 Who was it who repealed Roosevelt's Glass-Steagall act that separated savings banks from investments banks? Stand up, Biill Clinton: "I did not have sexual relations with Goldman Sachs." Now we can see how the banks will own EVERYTHING and anyone who doesn't think a revolution is necessary to reverse this is kidding themselves.


… the famed Glass-Steagall Act separating bankers and brokers, which had been passed in 1933 to prevent conflicts of interest within the finance sector that had led to the Great Depression. Now, commercial banks would be allowed to merge with investment banks and insurance companies, creating financial megafirms potentially far more powerful than had ever existed in America. … it would take half a generation – till now, basically – to understand the most explosive part of the bill, which additionally legalized new forms of monopoly, allowing banks to merge with heavy industry. A tiny provision in the bill also permitted commercial banks to delve into any activity that is "complementary to a financial activity and does not pose a substantial risk to the safety or soundness of depository institutions or the financial system generally."

Today, banks like Morgan Stanley, JPMorgan Chase and Goldman Sachs own oil tankers, run airports and control huge quantities of coal, natural gas, heating oil, electric power and precious metals. They likewise can now be found exerting direct control over the supply of a whole galaxy of raw materials crucial to world industry and to society in general, including everything from food products to metals like zinc, copper, tin, nickel and, most infamously thanks to a recent high-profile scandal, aluminum. ... In Denmark, thousands took to the streets in protest in recent weeks, vampire-squid banners in hand, when news came out that Goldman Sachs was about to buy a 19 percent stake in Dong Energy, a national electric provider. The furor inspired mass resignations of ministers from the government's ruling coalition, as the Danish public wondered how an American investment bank could possibly hold so much influence over the state energy grid. ...

In 2010, in the midst of the economic meltdown, Bill Clinton sort of admitted that he regretted listening to Rob Rubin and Larry Summers (who, like the monster in the final reel, refuses to die and keeps coming back for more) on derivatives, if not the repeal of the Glass-Steagall Act. But it's a bit late, now, Bill. You were the most powerful person in the world and you screwed us with more than a cigar.

From Businessweek magazine in 2008 where Bill is unrepentant and apparently jonesing after the Continental European system:

Mr. President, in 1999 you signed a bill essentially rolling back Glass-Steagall and deregulating banking. In light of what has gone on, do you regret that decision?

No, because it wasn't a complete deregulation at all. We still have heavy regulations and insurance on bank deposits, requirements on banks for capital and for disclosure. I thought at the time that it might lead to more stable investments and a reduced pressure on Wall Street to produce quarterly profits that were always bigger than the previous quarter. But I have really thought about this a lot. I don't see that signing that bill had anything to do with the current crisis. Indeed, one of the things that has helped stabilize the current situation as much as it has is the purchase of Merrill Lynch (MER) by Bank of America (BAC), which was much smoother than it would have been if I hadn't signed that bill.

MB: Phil Gramm, who was then the head of the Senate Banking Committee and until recently a close economic adviser of Senator McCain, was a fierce proponent of banking deregulation. Did he sell you a bill of goods?

BC: Not on this bill I don't think he did. You know, Phil Gramm and I disagreed on a lot of things, but he can't possibly be wrong about everything. On the Glass-Steagall thing, like I said, if you could demonstrate to me that it was a mistake, I'd be glad to look at the evidence. But I can't blame [the Republicans]. This wasn't something they forced me into. I really believed that given the level of oversight of banks and their ability to have more patient capital, if you made it possible for [commercial banks] to go into the investment banking business as Continental European investment banks could always do, that it might give us a more stable source of long-term investment. "