Day of the Locust review: this is us. Now! 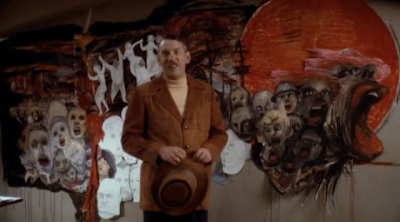 The Day of the Locust is a superbly intelligent movie about the madness of crowds and the nightmarisation of the American Dream, which increasingly resembles a documentary about today's collective id. Director John Schlesinger's film adaptation manages to be faithful (if over-literal) to Nathanael West's coruscating book, set in early Hollywood's Sodom and Gomorrah.

Tod Hackett (William Atherton) is an artist employed by one of the major studios in 1930s Hollywood. While he's working on the lavish epic, Waterloo, he meets and hangs out with ("befriends" is too strong a word for such an alienated world) the local characters, mostly deluded and in the gutter but jealously looking up at the stars.

Donald Sutherland is the perfect Homer Simpson, a gangling, lugubrious square; a big lug who's a big fail with the ladies. My viewing companions considered Sutherland too young for the role, but I thought he was just right as a man entering premature middle age. (After all, Matt Groening's Homer Simpson is supposed to be a mere 38.) Like the other men in the movie, Sutherland's Homer falls in love with flighty 17-year old wannabe starlet no-hoper Faye Greener played by Karen Black who, despite a valiant effort, is too old for the role of a lost teenager. Black is beautiful and a terrific actress, but far too womanly to play this fey child-woman.

Burgess Meredith plays has-been vaudevillean Harry Greener, Faye's curmudgeonly father who, even at the end of his life, is still performing, but for nickels and dimes selling polish door-to-door. The film won Meredith both Oscar and BAFTA nominations for best supporting actor.

There's a bitterly funny surreal element running through the movie, such as the horse in the swimming pool and a vicious dwarf. You are made well aware that neither author nor filmmaker have much liking for Hollywood, a bubbling cauldron distilling the worst of America. The centre cannot hold and it goes spinning into deadly lunacy.

The set-piece scenes of the studio accident, with its resulting cover-up, and the cockfight are powerful and disturbing. The nightmare closing sequence outside the Grauman's Chinese Theatre movie premiere is brilliantly done and will stay with you for a long time.

Note who's playing the demonic poppet Adore, a Shirley Temple from Hell. It's a young Jackie Haley who went on (as Jackie Earle Haley) to play the psychotic Rorschach in Watchmen!

However, there's a danger that in drawing such grotesques, Schlesinger misses the underlying humanity that was present in the book.

I loved both but I'd recommend that anyone drawn into the nightmare vision of the movie reads the book as well. It's an easy fast read but fills in much that film can't depict, such as the sequence where Tod searches for Faye through the studio backlots. The madness of the system becomes apparent as he fights his way through the disparate sets and costumed freaks of a society that has no history or heart. It's all jumbled up and crushes everyone like a huge remorseless, relentless juggernaut. West's ability to write visually and fire his damning view of the world straight into your frontal lobe works especially well here.

Email ThisBlogThis!Share to TwitterShare to FacebookShare to Pinterest
Labels: American Dream, Homer Simpson, Nathanael West, The Day of the Locust