Letter to Wendi Deng: Tony Blair - what were you thinking? 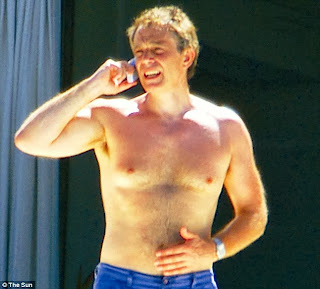 Dear Wendi, Uncle Mao says get thee back to the Beijing Academy for Lady Spooks coz it's not just the wrong end of the stick you're grabbing … We had a whole module on HOW NOT TO TURN INTO NINOTCHKA but you missed that session coz you had your botox appointment. OK, so I got the fuzzy end of the lollipop and stepped in some British far left but now that I've scraped it off, we'd better get some results before the motherland hits Number One spot in the fiscal hit parade, which if I'm any judge of horseflesh, should be here in a couple of minutes. http://www.vanityfair.com/society/2014/03/wendi-deng-note-tony-blair

OK, Wendi, you scamp. You've gone and done it now. In the belly of the beast, Mordor itself, and you forget the CCTV? And the staff? And the security squad? What were you, drunk on Tone's pheromones? So now the whole world thinks you "fed" Tony at Rupe's own table (Module No 6 at the Beijing Academy for Lady Spooks, if memory serves me right — was it the old strawberry in the chocolate fountain number?), and that he followed you to your bedroom - led by the short and curlies, no doubt. (I definitely prefer our long and silkies to caucasian kinkies, but each to their own).

Will you please hurry up and come home? I will be in the jet … yes, THAT jet with the engine running. Uncle Mao says I should leave the jet in the hangar with the engine running and you in it but I told him not to despair. Re-education is a marvellous thing even if you won't appreciate it for the first year and a bit. Bring a book. (And, yes, the Sideshow Bob escapades at the Old Bailey are sidesplittingly hilarious. Charlie's mags, huh? Who does Sideshow think she's fooling in her cute Peter Pan collar. Wash that image out of your eyes if you can.)
http://www.dailymail.co.uk/news/article-2552140/Sexy-legs-piercing-blue-eyes-Wendi-Dengs-explosive-note-Tony-Blair-revealed-magazine-marriage-Rupert-Murdoch-collapsed-amid-rumours-crush-former-prime-minister.html
Posted by Madam Miaow at 2/06/2014 02:52:00 pm