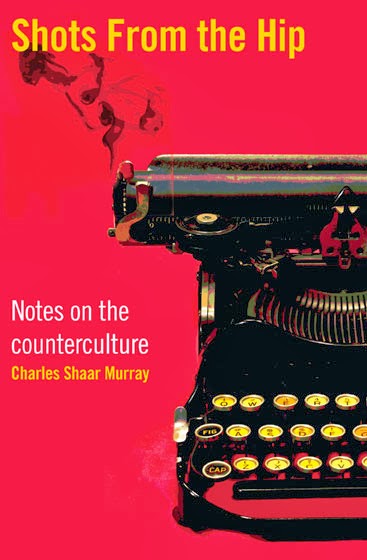 At last, the new long-overdue edition of Charles Shaar Murray's coruscating collection of journalism — Shots From the Hip (I told him his next one should be called Shots From the Hip Replacement) — first published in 1991, with a new introduction by Joel Nathan Rosen and a new afterword by CSM himself.

It puts together Murray’s writing on music and much, much more from the 1970s and 1980s in New Musical Express and elsewhere, edited and introduced by Neil Spencer. It shows just why Murray acquired the reputation of being the most intelligent and acerbic popular music critic of his generation.

His witty and beautifully crafted pieces – a mix of reviews, interviews and extended critical essays – are as readable today as when they were first written. He was always ahead of the game, noticing up-and-coming artists (and recording sad declines of the once-great) before anyone else. And, almost without exception, his judgments stand the test of time remarkably well.

Shots From the Hip is a classic of its genre, essential reading for anyone with an interest in popular culture, funny, perceptive and energetic.

‘One of the best British writers on pop music, and this is a compilation of HIS best.’
SIMON NAPIER-BELL, GUARDIAN

‘The New Musical Express was one of the big things in my life … there was outrageous writing by Charles Shaar Murray, Nick Kent and, later, Julie Burchill — what they were writing was unbelievable! The NME was so important for lonely suburban kids. It was a lifeline.’
DANNY BOYLE

‘This is an extremely intelligent man who happens to find expression and pleasure in a genre that many comparable intellects dismiss as worthless. For those whose love of rock music has survived their apprehension of its partial absurdity, this book is there to be savoured, to be read slowly and with a great deal of relevant musical accompaniment.’
THE TIMES

‘Murray’s work is particularly impressive because it was written at the time. Murray ragged on Blondie and the Clash, for example, before anyone had heard of them.’
MICHIGAN DAILY

‘“Some people are born dull,” starts a piece on George Harrison and his 1974 ballad Ding Dong, which the author calls a “hideous piece of garf”. Madonna is “Our lady of hard work”, whose 1990 Blonde Ambition tour was a “Broadway musical in all essentials except for its lack of plot”. This irreverent and colloquial collection of British pop-music criticism spans 20 years and tosses in hundreds of musicians, insights and insults.’
ST PETERSBURG TIMES (FLORIDA)

Charles Shaar Murray starts a summer course of his Hothouse Project "Journalism as Craft And Art" writing masterclasses in West Hampstead — eight Thursday evenings from 29th May.
Posted by Madam Miaow at 2/28/2014 11:57:00 am