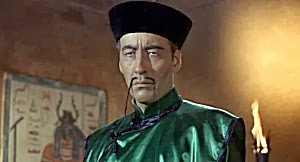 I'd already expressed my delight in seeing Daniel York's lively satire, The Fu Manchu Complex, at the Oval House Theatre last week, but a rash of resentful mainstream reviews prompts me to expand on my response.

In particular, the Guardian's theatre reviewer Maddy Costa seemed completely out of her depth, writing a stunningly superficial piece that simply did not geddit. The poor woman didn't even derive any fun from it, making me wonder why she bothers with theatre reviewing at all if it's all such a bore and a chore.

To be fair, York has a fine line in jolly-japes one-liners and crude national insults: the Scottish woman dismissed as a "moronic haggistani", the Irish man ridiculed as a "potato-nosher clover-face". But having a character acknowledge that events on stage are "dashedly dramatic" does not postmodern irony make: without it, the play feels weirdly anachronistic.

This is, at best, mischievous. Daniel York has deftly demolished a slew of stereotypes, setting them up and bowling them down like skittles in a boisterous romp through the yellow peril canon. He dredges up every unpleasant racist colonialist epithet and then, when you think he must have exhausted his supply, he goes and finds some more. As Artie in The Larry Sanders Show once said, he hits rock bottom and then breaks through to a whole new bottom no-one ever knew existed — much how racist ideology burrows into language.

What's different here is that because such archetypal EDL-esque heroes as Sax Rohmer's Nayland Smith and his sidekick Petrie, who deliver these insults, are played by east Asian actors — the very people mocked in the Fu Manchu books — the absurdity of such dehumanisation is shown up under a spotlight, diced, cubed and wrapped up in a pretty yellow bow.

According to Ms Costa, it's all merely a crude context-free repetition of national insults. "Oh look, they're just as racist." How she failed to notice both the sub-text and the twist, I can scarcely begin to fathom.

York could have written anything, and almost anything would be an improvement on this cod-Edwardian schlock-horror farce burdened with cock jokes and schoolboy sniggering.

This year marks the centenary of the original publication of the Fu Manchu books, making this a timely and pertinent production. And yet we still get Sherlock reboots regurgitating the same "cod-Edwardian schlock horror" (the Sherlock episode "The Blind Banker"), and Radio 4 giving us all-white Fu Manchu yellow peril fantasies (Fu Manchu in Edinburgh). How's that for  being"weirdly anachronistic". Why is the Guardian not challenging these?

She appears to have missed why tiny todger cock-jokes might be hugely relevant when Chinese males are uniformly dismissed as being hung like hamsters — one way colonialism dehumanised an entire race is by dissing their sexuality. "Black men were labelled superstuds. Chinese men got the reverse stereotype. It's a sort of Goldilocks Syndrome — or Goldicocks — not too big, not too small but just right. And 'just right' is the European norm. The 'horn norm'", as I pointed out in my own solo show, Anna May Wong Must Die!

Talking of colonialist dissing of sexuality, as Fah Lo Suee, the daughter of Fu Manchu, Jennifer Lim's schizoid oscillation between dragon lady and sexy lotus blossom was a joy to behold, nailing both stereotypes with wit, brio and verve. The diminutive Paul Chan as Nayland Smith is a natural comedian, funny and likeable before he even opens his mouth: truly inspired casting. And there are many more great touches, such as the Borg implant-like white quarter-masks to go with the assimilation theme.

I do question why two Guardian writers (the other being Matt Trueman, who originally reported the RSC director Greg Doran's spiteful "sour grapes" comment) have given this hugely entertaining bundle of fun a measly two stars. Was it perfect? No. Did it deserve a mere two stars? Definitely not. If you're trying to reinforce the notion that we're "all crap so why all the fuss?", well done. Five stars. Keep the interlopers off our pitch and whatever you do, don't let them play with our ball. You'd think some people just don't like having their imperial myths deconstructed.