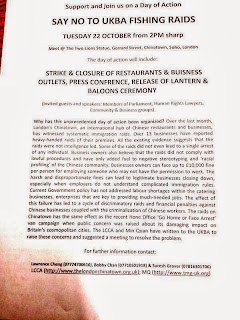 British residents have been sent texts by the UK Border Agency telling them to "go home". Two of them, Bobby Chan, a legal advisor for the Chinese community, and Suresh Grover of The Monitoring Group who was prominent in seeking justice in the Stephen Lawrence murder case, have received the threatening messages and we wonder how many more innocent UK citizens are being frightened out of their wits by Theresa May's boot-boys.

In response, London's Chinatown will be shut down tomorrow as a day of action against heavy-handed racist tactics. The protest gathers at 2pm in Gerrard Street and you'd better get your dim-sum in quick because by 3pm, it's down tools and onto the street.

The last time the UK Chinese went on strike was in 2001 when they were scapegoated for the Foot and Mouth Disease outbreak to divert anger from the Blair government which had failed to deal with the crisis. As a result of the protest, minister Nick Brown had to issue a public apology. [Correction: we did it again in 2007. Yay!]

Let's hope the Chinese who George Osborne and Boris Johnson have been wooing don't notice that this is how Chinese people are viewed in Old Blighty.

I'll have an item on my Resonance FM programme, Madam Miaow's Culture Lounge, which starts at 5.30pm (Tuesday) and hope to talk to one of the organisers for a run-down of the issues.

The day of action will include:

STRIKE and CLOSURE OF RESTAURANTS, and BUSINESS OUTLETS and RALLY

Why has this unprecedented day of action been organized? Over the last month, London’s Chinatown, an international hub of Chinese restaurants and businesses, has witnessed systematic immigration raids.

Over 13 businesses have reported heavy-handed raids of their premises. All the existing evidence suggests that the raids were not intelligence led. Some of the raids did not even lead to a single arrest of any individual. Business owners also believe that the raids did not comply with lawful procedures and have only added fuel to negative stereotyping and ‘racial profiling’ of the Chinese community.

Businesses owners can face up to £10,000 fine per person for employing someone who may not have the permission to work. The harsh and disproportionate fines can lead to legitimate businesses closing down, especially when employers do not understand complicated immigration rules.

Current Government policy has not addressed labour shortages within the catering businesses, enterprises that are key to providing much-needed jobs. The effect of this failure has led to a cycle of discriminatory raids and financial penalties against Chinese businesses coupled with the criminalization of Chinese workers.

The raids on Chinatown has the same effect as the recent Home Office ‘Go Home or Face Arrest’ van campaign when public concern was raised about its damaging impact on Britain’s cosmopolitan cities. The LCCA and Min Quan have written to the UKBA to raise these concerns and suggested a meeting to resolve the problem.

Thanks, Denis. Even better!

Hello Anna
I've been following your blog for a while. I am a proud BBC but now living in HK, adding some enrichment and diversity to the place.
Couple of points about this post, first the UKBA have stated that the raids were intelligence led, it is the quality of this intelligence that is at issue. Illegal immigration is an issue of public concern and the government should take steps to remove those who have entered the UK illegally regardless of race. Across the border in Guangzhou the Chinese police also carry out these type of raids against the African community and in 2009 an African was unfortunately killed during one of these raids. So the UK is not alone in removing illegals.

Also in the era of austerity shouldn't these capitalists enterprises be hiring the local unemployed? And how come there are labour shortages and austerity at the same time?