And now... the inevitable takedown of Russell Brand just as he says something sensible on the occasion of his guest editorship of the New Statesman magazine. Yes, we've all been saying the system sucks and we need a change for the betterment of the majority but, as Rusty Rockets acknowledges in his self-deprecating way (because this man is not stupid), his celebrity means that they gave his views an airing for once. And not just a thirty-second soundbite but a whole TEN MINUTES! It makes a change from the usual shrink-the-state nobodies propelled into the public eye, as usually happens on the now-execrable Newsnight.

And lo, it was wonderful to behold. It cheered us up, kickstarted the debate and has the Right getting their silk knickers in a twist. What's not to like?

Can we please focus on what Russell is saying and not indulge in the irrelevant twaddle about what his hair's doing and whether he wears purple velvet tails (or has a long scaly red one. Ooh-er!). Must we always share the attention span of goldfish? This is all a massive diversion from the issues he raised and plunges the debate into Miley-Cyrus-circus territory (and this is the very first time in the current round of star-gazing that I've mentioned the idiot who makes the slitty-eyed gesture, or "sub-species" Morrissey, who've both been tsunamied at us by the broadsheets as much as by the tabloids these past weeks. Let's thank Russell for knocking them off the top media perch.).

Is he sexist? Yes. Is he a thoroughly nice chap who refused to take his pop-star missus to the cleaners when they divorced? Double yes. Get out of your nappies and start enaging with the issues. He's not the messiah, he's a very naughty boy who the Establishment would like to see strung up with his own flowing locks, so let's not look the gift-horse in the mouth. Being a dick in one area of his life does not negate what he's said on this occasion.

For me, I'm more worried that the Staggers' Last Supper photo is so unbelievably white (although one of the writers and a couple of the short opinions reflect the ethnic make-up of Great Britain and the world), but we can deal with the left's whitewashing of the movement another time (or read what some of us have already observed and been ignored).

For now, Russell's galvanised the movement, joined the dots and naturalised the progressive discourse. That's a considerable achievement. Well done.

Medialens on media sneering about Brand. 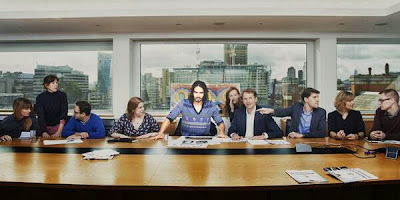