Which is the greater crime – poverty or shoplifting? by John Wight 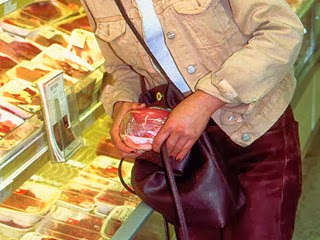 I personally wouldn’t shoplift unless I was pauperised and hungry, but maybe that's the bourgeois brainwashing I acquired as a kid growing up in Hackney.

I would add, however, that when my purse containing not only cash and all my cards, but a fifty quid note my late dad had given me for my last birthday before he died and which I couldn’t bring myself to spend, was lifted from my bag in the fruit and veg aisle at Finchley Road Sainsbury’s, the staff and security were insultingly unhelpful. They refused to call the police, allow me to view the cctv tapes or view it themselves and report back their findings. Neither did they file a report to management. They could not have cared less about theft in their store if it was from a customer. So I would applaud any little old lady nicking a joint of beef or her favourite tipple. Or anyone, actually.

In retrospect I should have yelled for the cops as quickly as Sainsbury's would have done had it been someone nicking a loaf of bread from their store.

Which is the greater crime – poverty or shoplifting?
by John Wight

Periodically, I am invited on the Call Kaye radio phone in show on BBC Scotland to give my views on various issues. Presented by Kaye Adams, it’s on every weekday morning and covers stories particularly relevant to Scotland, though invariably UK wide in this regard.

Earlier this week I received a call from one of the producers. They were planning an item in response to a new campaign initiated by the Scottish Government clamping down on the illicit trade in counterfeit goods. Looking for guests to speak to the issue, he asked me for my thoughts – whether I thought it was right or wrong for people to knowingly buy counterfeit goods – clothes, perfume, mens and womens accessories, etc – this on the basis that according to the police and the government people who do so are essentially funding criminal gangs that also deal in drugs, people trafficking, and are involved in more serious criminal activities.

I detected surprise when I told him that the issue came down to well off middle class people pointing the finger at poor working class people and telling them how bad they are. As for the argument about propping up organised crime, which deals in human misery, I told him there was no moral difference between that and buying an item from a high street retailer produced by workers kept in conditions of near slavery throughout the Global South.

Further, if we don’t want people buying counterfeit goods we need to make sure they have enough money to buy the real stuff. Why should poor people be locked out of society and its norms? In the West we have been conditioned to believe that we are what we buy, signifying our value and status.

Poverty doesn’t just have a material impact on those who suffer it, it has a psychological impact, crushing the spirit. Counterfeit designer goods allow those without to enjoy the feeling of belonging, to being part of the mainstream, which is vital to a person’s sense of self esteem, however false.

In the end, the producers decided not to have me on the show to discuss this particular item.

But what struck me about this exchange was the extent to which it revealed a widening disconnect between the haves and have nots, on the level of morals as well as income, exacerbated by the recession and the current government’s policy of making the poor pay for an economic mess effectively created by the greed of the rich.

The values of the rich are dominant everywhere you look. They literally scream at us every minute of every day, holding up individualism, materialism, consumerism, money, and success as the sine qua non of human happiness and worth . Neoliberalism, or untrammeled capitalism, sits at the foundation of these values, an economic system predicated on competition and with it the separation of society between winners and losers.

In the current climate the number of ‘losers’ in this ugly scenario are increasing at an alarming rate. Worse, given the aforementioned role of the Tory-led coalition government currently in power, the consequences of ‘failing’ are more grim than they have been for a generation.

The normalisation and acceptance of foodbanks up and down the country – a concomitant of the assault on wages, benefits, and incomes of the poor, both in work and out – is proof positive of the callous disregard for the well being and dignity of the victims of poverty in Britain in 2013.

The idea that the dominant values and morals of the rich and well off should or even could have any purchase among those whose lives have been reduced to a daily struggle to keep body and soul together merely adds insult to injury.

This is further illustrated by a recent story that appeared in the Mirror on the revelation that shoplifting is on the increase, particularly of basic food items such as meat and cheese.

Is anyone surprised? Moreover, it begs the question of whether people struggling to feed themselves and their children are morally justified in stealing food in order to do so.

I believe the answer to this question is unequivocally yes. Those who take the opposite view – both on the issue of purchasing counterfeit goods and shoplifting – will argue that neither is a victimless crime, as many seem to believe.

Perhaps, but neither is poverty. In fact, more than a crime poverty is an abomination, especially when it has become as widespread as it has in the UK – one of the richest economies in the world – in the 21st century.

The real criminals in society are not those who steal food from supermarkets in order to keep food on the table. The real criminals are those responsible for creating, championing, and maintaining the grotesque inequality, despair, and poverty which compels people to do so.

As the 19th century German philosopher Ludwig Feuerbach wrote: ‘Where the material necessities of life are absent, then morality necessity is also absent’.
Posted by Madam Miaow at 10/01/2013 02:27:00 pm

Reminds me of Jean Valjean.