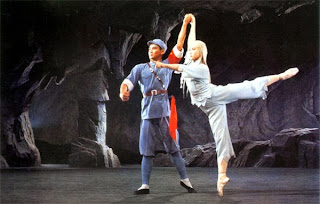 "She's over there ..."
Tuesday sees the launch of my Resonance FM series with "Oh Other, where art thou?", discussing yellowface, blackface and east Asians in the kulcher. My guests include Daniel York (The Fu Manchu Complex) and his band Wondermare, actress Siu-see Hung, Dr Diana Yeh and Ben Chu of the Independent who's just published Chinese Whispers demolishing myths about the Chinese.

On Monday 21st October I'm on the Orwell Prize 2013 launch event panel talking about the phenomenon of online trolling.


This year's discussion will focus on 'Internet and the Modern Self: Manners and Abuse Online'. The panel of speakers include Helen Goodman MP, Madam Miaow Says blogger Anna Chen and Professor Suzanne Franks. What is going on after a notable summer of online abuse? Why are online personas so different? How do we fix this?

MADAM MAO'S GOLDEN OLDIES
3.30pm, BBC Radio 4
Saturday 26th October
A repeat of my programme about Jiang Ching's model operas made during the Chinese Cultural Revolution and what happened to some of the people who took part.
Posted by Madam Miaow at 10/13/2013 01:17:00 pm