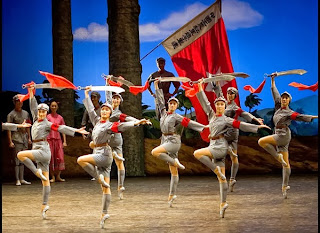 In Madam Mao's Golden Oldies, I revisit the Chinese Cultural Revolution Model Operas that I first heard as a child in the 1960s and 70s and discover how they are, somewhat surprisingly, enjoying a new lease of life.

Growing up as a London-born red-nappy kid with Beatles and Bowie as my soundtrack, I was occasionally dragged by my parents to the Chinese legation in Portland Place (it had lost its official embassy status due to the cold war ruckus) for screenings of the latest movie spectacular to emerge from the arts commissar, Chairman Mao's wife, Jiang Qing. These were the Yangbanxi, the Eight Model Operas; films with titles such as The Red Detachment of Women and Taking Tiger Mountain By Strategy.

My Hollywood sensibility found these crude melodramas puzzling and somewhat turgid but then they weren't made for (relatively) pampered East End kids like me: they were made for the peasants and workers who had rarely if ever been represented in their own culture.

Within living memory, mass starvation, imperialist conquest and the horrors of the Japanese invasion had devastated the nation. Barely twenty years into its communist revolution, the population was struggling to get back onto its feet.

Madam Mao not only banned the traditional Beijing operas and their stories about emperors and princesses, but also cast out decadent western music and movies as being a corrupting influence on the masses. Quelle surprise when it later transpired that the former actress was fond of indulging her tastes in the privacy of her own screening room. But Jiang Qing was canny enough to harness the emotive power of these works with the help of the Chinese cultural intelligentsia who hadn't fallen out of favour.

In the programme, a variety of people who were intimately involved in the model operas recount their experience. Among them, Anchee Min, author of Red Azalea, had been plucked from working in the fields because she was used to "carrying 300 pounds of manure". Jingdong Cai is now conductor at Stanford but learnt his trade in Madam Mao's army of young musicians

Madam Mao's favourite films? The Sound of Music and Jane Eyre. No, not the classic Orson Welles and Joan Fontaine version, but the crappy George C Scott remake. Now, what does that tell you about arbiters of taste?