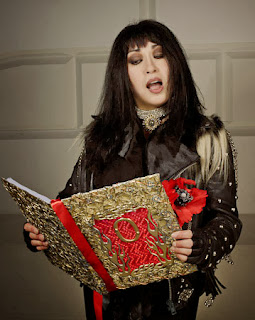 Charles Shaar Murray and I are reading poetry tonight at the Bohemian Community Centre pub, 762-764 High Rd Finchley N12, brought to us by the Friern Barnet library occupy crew who won a new lease of life for the only public space in the area, a lovely little purpose-built library that was about to be swallowed whole by developers. They appear to be doing another grand job and liberating an abandoned pub for the community. 7-11pm. Phoenix Rainbow MCs.

I'm also reading poetry at tomorrow's pre-The Fu Manchu Complex public debate at the Oval House Theatre, 4.30-6.30pm. The main event in the evening, a satire by actor Daniel York who was at the centre of the RSC The Orphan of Zhao controversy, is a satirical view of the yellow peril scare that is going through a revival at the moment.

Dan and I have been interviewed for Overwhelming China, a programme examining the origins of the anti-Chinese mania ratcheting up as China heads for superpower status. To be broadcast 11am, Friday 1st November on BBC Radio 4.

Before I forget, I am hosting a short series of Madam Miaow Says on Resonance 104.4FM commencing Tuesday 15th October at 5.30pm for an hour. We launch with "Other: Where Art Thou?" exploring yellowface, the return of blackface and the general backward march of representation for effniks. With Dan York, Julie Cheung-Inhin and Emily Seu-see Hung, and music from Charles Shaar Murray and Melody Brown.
Posted by Madam Miaow at 10/04/2013 01:31:00 pm