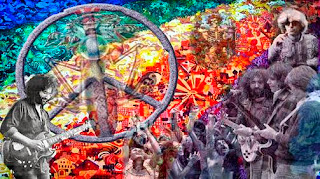 First, a quick plug for tomorrow when I'm on the Orwell Prize 2014 launch panel at the Frontline Club talking about the Internet and the Modern Self with Helen Goodman MP, Professor Suzanne Franks (City University London, Author of ‘Women and Journalism Challenge series: Reuters Institute for the Study of Journalism‘), Dr. Aaron Balick (Author of ‘The Psychodynamics of Social Networking: Connected-up Instantaneous Culture and the Self’) and Orwell Prize director Jean Seaton.

This Tuesday, the second programme in my new Resonance FM radio series looks at the counterculture: what is it, where did it go and can we have it back, please?

My guests this week:

Legendary award-winning author and journalist Charles Shaar Murray, who brought the counterculture into the mainstream when he got his foot in the door at the New Musical Express in the early 1970s.

Clare Palmer who's the current editor of the Internatonal Times — or IT — a legendary publication that began in the 1960s as a proper inky.

And Phoenix Rainbow, who was one of the Occupy crew who took on the developers intent on destroying the Friern Barnet Library — the only public space in the area — has won it a valuable respite for a couple of years as a venue for cultural learning and expression for the community.

Listen to the launch show, "Oh Other: Where Art Thou?", first broadcast live Tuesday 15th October 2013.